The glory of an old cookbook 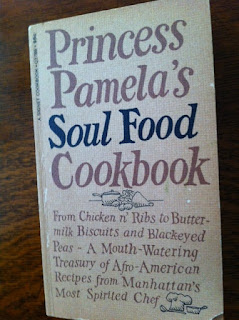 Good friend Carol Roark gave me an old cookbook she’d picked up at a garage sale for next to nothing. It’s Princess Pamela’s Soul Food Cookbook, copyright 1969 and signed by Princess Pamela herself. That’s not so old, but the pages are yellowing and feel fragile.


Princess Pamela ran a tiny soul food spot in Manhattan, Princess Pamela’s Little Kitchen, where noted food expert Craig Claiborne was one of her regular customers. The book is subtitled “The Cooking of Black America,” and a blurb tells us that “What Julia Child did for Beef Bourguignon, Princess Pamela does for ham hocks and turnip greens.”


There’s a reproduction of the hand-written menu in the front of the book, with 1969 prices: BBQ ribs, $2.75; Meatloaf, $2.00; Liver (smothered with onions), $2.25; Oxtail (ragau [sic]) $2.00; fried chicken (southern style) $2.25; pork chops (smothered with onions) $2.80. No price on the vegetables but they include collard greens, blackeye peas, salad beautiful, steamed rice, homemade potato salad, and yams. Hot corn bread was served with meals but if you wanted an extra serving, it cost you twenty cents.  For dessert: rum cake, bread pudding (with fruit sauce), and peach cobbler, seventy-five cents each. Buttermilk was among the drinks offered, which says something huge to me about a food culture.


Princess Pamela was a philosopher as well as a cook, and each page of the cookbook is enlivened with one of her sayings: “One way to stop an argument is to fill a man’s mouth with good cookin’.” Or “Three things I find offensive—mean men, back-bitin’ women, and sloppy cookin’.” And “I prefer my meats firm but tender which goes for chicken, pork chops, and men.”


I prowled through every page of the book and found some recipes you and I probably won’t ever cook, like chitlins, fried salt pork, tripe either boiled and served with tomato sauce or fried, cracklin’s, scrambled brains, pig tails ‘n’ beans, roast possum with sweet potatoes. But others sounded intriguing—peanut butter biscuits (my grandson would love those), chess pie (what’s not to love?), skillet corn bread, fried green tomatoes with milk gravy.


Many recipes intrigued me, but here’s one I really want to try because I’ve always wondered what to do with a ham steak (other than cook it in a pineapple/raisin sauce, which my mom did and I didn’t care for):


Combine the flour, dry mustard, and brown sugar. Work the mixture into both side of the ham. Place in baking dish and cover completely with milk. Bake at 350 for about an hour, until ham is tender. When it’s done, the surface should be brown and the milk almost all gone.


Curious about salad beautiful? It’s pretty much a tossed salad, with Boston or iceberg lettuce, a cucumber (unpeeled and chopped), a tomato, chopped, 3 scallions chopped, sweet green and red peppers sliced into rings, Greek olives, and lemon wedges or salad dressing.  If you choose lemon juice, Princess Pamela suggests dissolving salt, freshly ground pepper and a little sugar in a mild vinegar and added to the salad, tossing lightly, before decorating with pepper rings and olives.


Sounds good, doesn’t it? I wish I could have eaten at Princess Pamela’s Little Kitchen.
Posted by judyalter at 6:42 PM No comments:

Baked potatoes and poached pears--not together 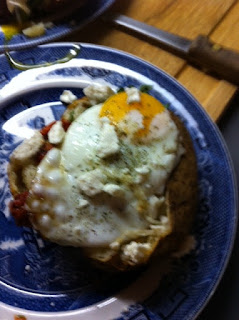 We're alway told how important girlfriends are, and no one has to convince me. I value my girlfriends, and this week I've sort of had a mini-celebration of them, entertaining one night a woman who lost her husband three years ago and, on Valentine's Day, a brand new widow. I loved cooking for them and loved devising new dishes.
Last night, I fixed baked potatoes topped with roasted cherry tomatoes, spinach, a fried egg, and feta (it doesn't look as pretty as it really was).

Bake potatoes--I prick them all over with a fork and rub olive them with olive oil to get nice, crispy skins. About 45 minutes before potatoes are done and you're ready to serve, put cherry tomatoes on a cookie sheet and roast in same oven. I put foil, thinking it would be easier; it wasn't, and I had to pick pieces of foil out of the tomatoes; next time I'll spray the pan. Roast until tomatoes collapse on themselves, checking frequently. About ten minutes before removing from oven, put spinach on top of the tomatoes.
Meanwhlle fry eggs sunny side up (a talent I don't have--my guest did a beautiful job). I recommend leaving them slightly runny so they mix with the potato.
Split potatoes and spread open; top with the fried egg and then cherry tomatoes and spinach (in the picture above, we did it the opposite order and while it tastes the same, I think it would look prettier with the tomatoes on top). Finally toss with crumbled feta.
Serves two; a hearty, filling dish. We didn't eat the salad I had fixed.

On Valentine's Night, my guests brought a wonderful chunky pea soup, and I provided an appetizer--hummus--and salad, which could double for dessert.

Here's what you need for two (easily doubled):

Slice the pear but do not peel (not necessary with Bosque as it is with other kinds of pears)
Simmer pears in red wine sauce (below) or in plain red wine with seasonings 10-15 minutes, turning often so slices soak up the good sauce (and don't splash on the shirt you're wearing as I did.)  Do ahead and let pears cool in the cooking liquid.
Line salad plates with Bibb lettuce. Top with sliced pears--I used four slices per plate.
Top with three or four slices of blue cheese--admittedly it's hard to slice neatly and you may end up crumbling it.
Top with six or seven raspberries apiece.
This makes a beautiful dish, and I'm sorry I didn't get a picture.
For the recipe I played with, see Mystery Lovers Kitchen (http://www.mysteryloverskitchen.com/), my favorite food blog, for February 13, 2013. There's a lovely picture of it with the recipe. This recipe came from Avery Aames, author of a cheesmaker's mystery series; her brand new titles is To Brie or Not to Brie. Check it out--her books are as good as her recipes.

If your guest doesn't eaten sugar, like one of mine, I think you could do this without the sugar, water and lemon joice.
Posted by judyalter at 7:45 AM No comments:

Email ThisBlogThis!Share to TwitterShare to FacebookShare to Pinterest
Labels: #cooking, #food, #reciipes, Avery Aames, To Brie or Not to Brie

Canned soups get a bum rap

Some time ago, I wrote a memoir/cookbook, Cooking My Way Through Life with Kids and Books —why I wrote it is too long a story to tell here, but it was fun to do and I was pleased with the results. A local university press that publishes cookbooks reviewed the manuscript and, after many months, sent a detailed six-page critique from a reader. The critique was like a roadmap for a revision, and I was grateful, but at one point it called my recipes “nice faux gourmet recipes.” Referring to my recipe for that standard, King Ranch Chicken, the anonymous critic claimed she never used canned soups but always made her own white sauce. The comment made me think of all the things you can do with canned soups without feeling guilty.


Canned soup recipes have probably been around as long as canned soups, and probably controversial just as long. The critic’s comment sounded like snobbery to me, but a lot of people simply prefer not to use canned ingredients. One person on a web forum about canned soups said she objected to tomato soup recipes, because they left an aftertaste. I don’t particularly like beef-based soups, like vegetable beef, and I hate the smell when someone is heating one in the office microwave. What did I really mean by canned soups? Creamed soups, such as chicken, mushroom, and celery. But then there’s that good bacon/spinach dip recipe that calls for cheddar cheese soup (not always easy to find).


Some people object that canned soups are high in sodium and fat. Yes, but you can buy low sodium and low fat. Others simply prefer not to use canned soups and make white sauce, as the lofty critic did, or use one of the recipes for substitutes on the web.


Trouble with that is, you’ve used four prepared ingredients, gone to a lot of trouble, and probably (I don’t know this for sure because I haven't tried the recipe) produced a pretty tasteless or artificial-tasting product. There is of course a difference between canned and prepared soups, like instant vegetable bouillon or dried onion soup mix, from which almost everyone makes that sour cream dip that disappears as soon as you put it out..

Once I gave a “retro” dinner party, and we all brought dishes from the ‘50s. One guest brought that dip, and one of the men looked at his wife and said, “Can you get this recipe?” She smiled and said, “I think I can figure it out.”

Neither Jacques Pepin nor Julia Child ever cooked with prepared or canned soups, but Rachel Ray does. I’m for canned soup in moderation but not to the extent I need to buy 101 Things to Do with Canned Soup or The Biggest Book of Canned Soup Recipes.


Almost everyone knows how to make King Ranch Chicken with soup, but here are a couple of less common recipes that I’m fond of.


Brown meat in skillet, breaking up the chunks. Put meat in a crock pot, add remaining ingredients, and heat until cheese melts and ingredients are blended. Serve hot with corn chips. I used to put chips in the bottom of soup bowls, top them with this queso, and serve it to my kids as a one-dish meal.


Combine everything but bacon and paprika. Heat until cheese melts. Stir in crumbled bacon, sprinkle with paprika. Serve hot with crackers.


Don’t know how to make King Ranch chicken? Write me at j.alter@tcu.edu. It’s a Texas classic.
Posted by judyalter at 7:14 PM No comments: