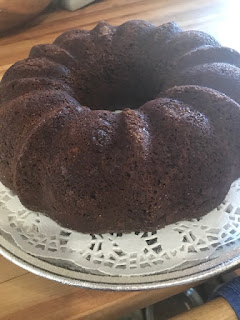 More years ago than I care to count, my oldest child, Colin, was enrolled in the wonderful and now long-gone TCU pre-school program. There was to be a parents’ program, and we were all assigned recipes, so that some brought the same entrée, others brought the same dessert. Mary Helen was one of Colin’s classmates, and I drew her mother’s recipe for coffee cake.


It turned out to be a Bundt cake, and I had never made one before. If you are of my generation though, you will remember all those cake recipes that incorporated box cake mix and pudding mix. This  was one of the best of those. I dutifully bought cake mix, pudding mix, and a Bundt pan. I’d been baking successfully since my early teens, so I had no qualms as I sailed into this fairly simple and straightforward recipe. After it came out of the oven, I let it sit on the counter to cool. When I took it out, half came out and half the cake stayed in the pan! Disaster!


I called a friend to moan about my bad luck, and she just laughed. But then she told me to let it cool no more than five minutes and then promptly take it out of the pan. I went to the store, bought the ingredients again, and made a cake that turned out fine. Ever after, Mary Helen’s father called me “the two-cake lady.”


But that recipe turned out to be a staple in our family, the kids favorite and something I always served at my annual tree trimming party. You can do it in as many flavors as you can find the necessary mixes—lemon and vanilla come to mind, but I did know a woman who made a strawberry version. We stuck to chocolate.


At the holiday season, this is great to have on hand for surprise guests or to give as a gift to a neighbor. I made the cake pictured above for a neighbor, but Jordan gets credit for its picture-perfect appearance. A Bundt pan is too tall for my toast oven, and even if I could squeeze it in, the cake would undoubtedly rise to burn on the coils. So after I assembled it, Jordan baked it in her oven and was therefore cautioned about taking it out of the pan correctly. I think she was a bit insulted that I thought she needed that instruction, because she frequently makes Bundt cakes of several types, including a wine cake. At any rate, we were both proud of the product, and she delivered it to a neighbor with four children.


Mix together everything but sugar and cinnamon. Grease Bundt pan with butter or solid shortening, being sure to get every bit of the surface. Mix equal parts of cinnamon and sugar (about tsp. each) and sprinkle on all sides of prepared pan. Add the batter, evening it out as much as possible (it’s a thick batter), and top with cinnamon and sugar. Bake at 350° for 50 to60 minutes (check with a long kebab skewer or something similar); it often must cook longer. Cool five minutes and remove from the pan. DON’T WAIT ANY LONGER. Run a knife around edges of pan and tunnel in the middle, and then top with a plate, invert, and gently shake to remove the cake from the pan.
You can drizzle icing over it if you want, but I consider that gilding the lily.

Posted by judyalter at 9:41 AM No comments:

Sunday supper is an old tradition at my house. I started it when I was a single parent because I wanted my children to have the social experience, the conversation. Sometimes we had fifteen—usually my brother and his family, and then assorted friends, some regular, some occasional. John was a stickler for manners, which has served my children well, and he used to go around the table and have everyone tell about their week. Both the manners and the talk gave the kids a taste of the art of dining.
Sunday supper is a little different these days, but Jordan, Christian, and I usually make it happen—Jacob is often at church for supper but joins us when he gets home. Frequently I do the cooking, and I love the process of choosing the right dish. Often, it’s just an entrée and a salad.
This past week, I suggested a Mexican hamburger casserole that I’d found, but Jordan thought it sounded too heavy. She suggested a beef stew recipe, but a quick read told me they recommended cooking it thirty minutes or so—not to my mind enough time for stew. So I showed her several recipes, and she chose “No Peek Chicken.” I’ve been searching my mind, trying to remember who gave me that recipe. No success. But thank you to whoever it was.

No Peek Chicken
1 box long grain wild rice
1 can cream of mushroom soup
1 can cream of chicken soup
1 can water
Boneless chicken breasts or tenders.
In a greased 9x13 pan, mix the rice, the cans of soup, and the water. Arrange raw chicken over the rice. Cover and seal tightly with foil. Bake at 350o for 2-1/2 hours, without peeking..
Wild rice needs that long cooking  time, but I thought the chicken was overcooked—a bit dry and tough. I had done this recipe before with the Uncle Ben’s Instant Long Grain Wild Rice, and I think that and a shortened cooking time might give you more moist chicken. But this time, the rice was delicious. I used a six-oz. box with the band name Near East.
And I must add that in this gourmet age, I am not at all shy about confessing I make casseroles with canned soups. Easy, fast, and delicious.
A 9x13 pan won’t fit in my toaster oven, so I sent this into the house to ake. But the last time I did it, I used a smaller dish that did fit. So don’t rule this out because of the pan size.
I’d been wanting to fix a Brussel sprouts/artichoke hearts dish that a friend served several years ago, and I decided it would make a good side with the chicken. Jordan, however, protested that she’s tried Brussel sprouts more than once and just doesn’t like them. I’m willing to go with people’s tastes as long as they have tried the dish. And I confess I’m not always wild about those sprouts either. So I decided to substitute a second can of artichoke hearts for the frozen sprouts. Christian doesn’t like artichoke hearts, but I didn’t think he’d like Brussel sprouts any better—he likes them, he said later, if they’re crisp. My Austin family likes them that way too.

Posted by judyalter at 8:23 AM No comments:

Did you have cranberries with your Thanksgiving feast? About twenty percent of all cranberries sold annually are purchased over the Thanksgiving holiday. That bright red berry is what the food industry calls a “special occasion food.”


This year, visiting my son, there was a fresh, homemade cranberry relish, brought by a friend, on the table—a bit tart but good. There was also canned, sliced, jellied cranberry sauce—both my daughters-in-law love it. Those two dishes spoke of what I see as two different food philosophies!


For me, cranberry relish at the holidays should be the way my mom fixed it—well, really it was my dad who made it. Making cranberry relish was a ritual in our household before the days of food processors. Dad hauled out the old hand grinder, fastened it to a short worn stepladder—I can see that chipped green paint in my mind yet—and began to grind, a chore he did because, he said, it took too much strength for Mom to do it. I think they both enjoyed the shared work.


Thanks to his effort, a bag of cranberries, washed and sorted, an orange, peel and all, a sweet apple like a Red Delicious, also unpeeled, went into a bowl. Mom added sugar sparingly, getting it just right because we didn’t want it too tart or too sweet. You can find precise recipesfor raw cranberry relish should you need them on the internet, I’d suggest you use less sugar than recommended and then taste, sweetening to your personal palate.


Some people use honey instead of sugar. Others add a small can of crushed pineapple or some chopped pecans. It’s a flexible dish, that cranberry relish.[


The thing about cranberries is that they are an overlooked health food, as good for you as blueberries. They are naturally low in sugar, though they require sweetening to be palatable; they are rich in antioxidants which promote cardiovascular health. Cranberry juice is often recommended for treatment of urinary tract infections.


When you think of cranberries at the holidays, you probably think of fresh berries—they only seem to appear in markets in November and December. Truth is only five percent of cranberries are sold fresh—most are processed into juice, that abominable canned relish, or craisins—those delightful substitutes for raisins which are great in everything from salads to oatmeal.


Thanks to a neighbor, I discovered a new cranberry recipe this past Thanksgiving. Easy and quick, it’s officially called crustless cranberry pie. To me, it’s like cake and great for dessert—but shh! Don’t tell. I’ve been eating cake for breakfast.


½ cup chopped walnuts or pecans (I’m not always a fan of nuts, and I left them out)


Bake at 350o for 40 minutes or until wooden pick inserted near center comes out clean. Serve warm with whipped cream or ice cream.
Posted by judyalter at 6:59 AM No comments: