A continental dinner, sort of

I haven't been doing a lot of what I consider creative cooking lately, so it was good to cook a dinner for company last night. We had my first company dinner on the deck. My menu ended up representing several cuisines: For an appetizer, I served a dip of cream cheese, grated cheddar, sherry and curry, topped with chutney and sliced scalltions (find the recipe here on Mystery Lovers Kitchen in the archive listed as Sherry Curry Pate. With sherry, curry, and chutney it has echoes of both England and the Indian influence on English cuisine. 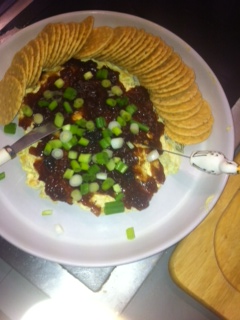 Delicious, and I had only a bit left over--served three of us--where I expected to have a lot.
The entrée was the piece de resistance--a pan bagnat. I had to look that up--on Wikipedia, I confess--and it is a traditional French sandwich made of a round wheat loaf made in the area of Nice and usually filled with salade nicoise. I used a smallish round of Parmesan with the bready insides scooped out, drizzled the dressing over the bread, and layered chicken, tomatoes, onions and lettuce.  You have to do this a day ahead, so look at the recipe below. 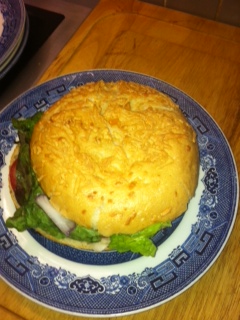 For a side dish, we went to Italy. I served pasta salad dressed with olive oil and red wine vinegar (no mayo) and filled with artichokes, chopped tomatoes, and diced scallions. Just before serving I added crumbled goat cheese.
I offered dessert, but my guests, a couple who are longtime good friends, declined until I said it was Black Forest Cake. Then they allowed as how they might have some. I had frozen individual servings of the leftover cake (quite a bit) in small storage dishes. I forgot to get them out to thaw until halfway through the meal, but Rodger couldn't wait--we ate semi-frozen Black Forest Cake, and it was delicious that way. So dessert brought Germany into our continental meal.
When I made the chicken for the sandwich I over-estimated a bit and made enough for Cox's army, so tonight Elizabeth, the friend who lives in my garage house) and I had chicken salad. Recipe for that follows too.
I like being back to creative cooking. Next weekend, a ranch casserole that has everything but the kitchen sink in it--perfect for Christian's birthday party. From haute cuisine to down-home Texas cooking. 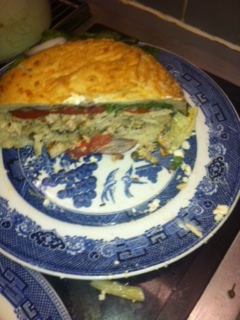 one whole chicken breast, pounded between wax paper until 1/4" in thickness

Slice the bread in half horizontally and pull out all the bready insides; discard or freeze to use for bread crumbs, etc.
Drizzle anchovy/lemon sauce over top and bottom of bread.
Line bottom with capers, drained.

Put the top on and smash it down with your hands to flatten. Wrap in foil and put in fridge overnight, weighted down by heavy skillet or canned goods--I used a lighter skillet and two cans of green beans.

Cut into wedges and serve. Rodger ate a quarter of the sandwich, Linda and I each ate an eighth and I had a half left over. Jordan and I ate some for lunch today, but there's still a quarter left in the fridge.

Really good and different, but I bet it would be good with nicoise ingredients (if you left out the olives)

Two chicken breasts, cooked and shredded (do not do this in the processor--I kind of shaved it into small pieces)
I ripe avocado, mashed
Juice of one lime
Cilantro, chopped, to taste

Mix avocado, lime and cilantro into smooth paste. Add chicken and stir. What could be easier? And so delicious.
I used the leftover chicken, so we could also taste the herbes de provence, which added a different element.
Posted by judyalter at 8:18 PM No comments: 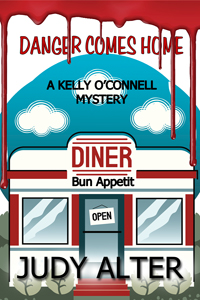 The newest Kelly O'Connell Mystery comes out in e-book form this week, and I got the cover a couple of days ago, It features the diner, Bun Appetit, which figures in the book. Besides a play on Bon Appetit!, the name indicates that this is an upscale hot dog café.
When I came up with the idea that one of the characters was going to open a hot dog café, I ran a contest for the best name. The winner, chosen by my insistent daughter, was Bun Appetit, suggested by an old friend and her husband. Some of the names were really creative: Chez Haute Dog, Dogs of Distinction, Frankly Wienerful, Decadent Dogs. The restaurant is based on a small blue-plate special place that used to be on Magnolia Avenue in Fort Worth--it had eight stools at the counter and that was it. Since, it's been remodeled into a beautiful but still small country Italian restaurant, Nonna Tata, that is one of my favorites.
I blogged several months ago about upscale hot dogs and the way people were creating them:

But here's a recipe for a one-dish meal, using hot dogs. Not sure they'd serve it at Bun Appetit, but my son-in-law loves it.
German potato salad with hot dogs


½ c. each water and vinegar


2 cans sliced white potatoes (The original recipe called for fresh cooked potatoes, of course, but this is one of the few places where I think canned does just fine and is actually better—they don’t crumble like fresh-cooked potatoes.)


1 pkg. hot dogs, brand of your choice (I like Hebrew National but often use Oscar Mayer Selects all-chicken franks these days--shhh, don't tell! They don't have a lot of other ingredients like preservatives--pure chicken breast)


Boil or grill the hot dogs (grill is better). Fry the bacon and drain on paper towels; if there’s too much grease in the skillet, drain some, but you want about one Tbsp. to cook this. Sauté celery and green onions in bacon grease. Add flour and stir.  Add water and vinegar, a bit at a time, stirring—more of each as needed until sauce is a good consistency. Add mustard. Add potatoes. Crumble bacon and stir in. Cut hot dogs into chunks and mix in (traditional hot dogs make a more colorful dish than chicken, and as my mom always said, "Food is half eaten with the eyes.") Sprinkle with parsley just before serving.

Posted by judyalter at 6:07 PM No comments:

When I was a child, we had Sunday supper on the screened-in front porch in the summer, and in front of the fireplace, on a tea cart, in the winter. It was a light meal in what was basically a meat-and-potatoes household. Sometimes a cheese strata, or spinach soufflé. I can’t remember what else—I suppose casseroles--but those suppers are a treasured memory.


Tonight, Elizabeth and I had a Sunday supper my mom would have been proud to serve. Poached eggs on salads and other things are all the rage these days, and the newspaper the other day had recipes for stacked dishes with poached eggs on top. One that appealed to me had polenta topped with spinach, sautéed cherry tomatoes, and an egg or two. Problem: Elizabeth can’t eat corn, so no polenta, and she doesn’t like tomatoes.


She was intrigued by one that had roasted potato salad, topped with eggs, so I made a combination. And it was wonderful—we both cleaned our plates.


Fry the bacon until crisp. Drain.
Toss the potatoes with 1 Tbsp. bacon grease and roast at 450 for 30 minutes. Discard or save remaining grease—I keep a small jar of pure bacon grease in the fridge, after years of discarding it. There are a few dishes that really need it.
Wash, stem and wilt the spinach. I tried to chop it up a bit too when I drained it.
When potatoes are done, season with lemon juice and Dijon—perhaps one lemon and 2 tsp. Dijon, more to taste.
Put potatoes on plates. Top with servings of spinach. Salt the spinach lightly.
Poach eggs and gently top the potato/spinach mixture. We both like them sort of runny, but do them the way you like. Serve salt and pepper for the eggs.


Serves four (I halved it).


Enjoy. It was one of the best meals either of us have had in a long time. We agreed it would also make a great brunch dish. Once again, we got so excited about eating, we forgot pictures, but it was pretty too. And we ate on the front porch, in lovely, wet, seventy-degree weather.

Posted by judyalter at 5:47 PM No comments:

I've been cooking lately and enjoying it. Never did worry about the oven heating up the kitchen in the summer. Last night, after eating at Jordan's house two nights, I volunteered to bring supper. I followed a recipe that I used to fix when the kids were young, especially with leftover turkey after the holidays. This time I used chicken tenders.

Chicken breast or tenders, about a pound, cooked and diced
Rice or noodles, pre-cooked
1 can mushroom soup
Vegetables - I usually use frozen green peas but neither Jordan nor Christian will eat them, so I diced celery and red onion, sautéed them in butter
white wine--about a cup
assorted herbs
potato chips
grated cheddar

Salt and pepper the chicken, put a few slices of onion on it, cover and bake till done.
Put the wine in a small saucepan, throw in herbs as you want--I used 1/4 to 1/2 tsp. each of oregano, salt, pepper, thyme, basil. Boil hard until wine is reduced and herbs turn black.
Throw it all together and stir to mix. Mix crumbled potato chips and cheese and use as topping.
Bake 30 minutes or so at 350.
I usually use noodles but used rice last night--I'm not a big fan of rice, and I thought the whole thing was kind of bland but Christian ate two helpings. The potato chip/cheese combination makes a wonderful topping for all kinds of things. And this has the virtue of being quick and easy and made with ingredients you usually have on hand.

Tonight I had a real success. I've been boiling zucchini before stuffing it, but I saw a recipe that called for baking a raw zucchini.

Halve the zucchini lengthwise, and scoop out the center part. Dice scooped out squash and mix with celery, red onion, sour cream and grated cheddar. Top with Parmesan and bake 45 minutes at 350 or a bit less. I used the toaster oven, and it worked great. Delicious! Should have taken a picture because it came out golden brown--lovely.
The recipe I saw online had crumbled meat and bacon in it, but I went vegetarian. Also kind of made this up, omitting the curry and tomato, though adding a tomato might be good.
Posted by judyalter at 5:29 PM No comments: