The night I didn't cook 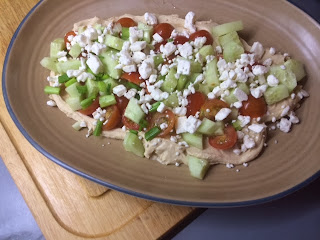 Hummus salad
I always, always feed dinner guests a homemade dinner, sometimes down home, sometimes a gourmet experiment. Except for last night. I had lured friends with the promise of a pot of soup since a "wintry mix" is headed to North Texas. But then I remembered that the "he" of this couple is sort of vegetarian, and I had that pan of spanakopita in the freezer. I went with a friend to the annual Greek festival and brought home the spanakopita, wondering who to share it with. Christian would have said, 'You want me to eat WHAT?" Jordan would probably have declined, and Jacob would have taken the required one bite and given his usual opinion: "I don't like it." My guests last night were perfect! The last time we dined together, we had Lebanese food, so this fit right in.
But what to serve with it? Aside from a Greek salad? As I've said here before I'm getting tired of tossed salads, Greek or not. I couldn't find tabouleh in the grocery (in retrospect I think I looked in the wrong place) but I did find tzatziki which I'm perfectly capable of making--but there it was already made. And from the company that makes the hummus I like best. Both items went into my shopping cart, and then from the long row of condiments, etc., at Central Market I chose marinated artichokes and dolma. I bought pita bread, which I had to search for, and overlooked the fact that it was honey-flavored. Nobody mentioned the honey in the pita.
So I had an array of appetizers--dolma, marinated artichokes, tzatziki, and pita. We lingered over them in front of the fire. Dinner itself was the spanikopita and a hummus salad, which is the only thing I fixed...and I hardly did any fixing for that.

Spread a container of hummus evenly over serving plate.
Optional: top with a layer of Greek yogurt (actually I forgot to buy the yogurt or I would have)
Top with chopped cucumber, scallions, halved cherry tomatoes, and crumbled feta.

All of the above made great leftovers for lunch today.

And the soup? It's simmering in the crockpot. A huge pot of soup. I'll need to share with someone.
Posted by judyalter at 11:39 AM No comments:

The joy of cooking--with a grandchild 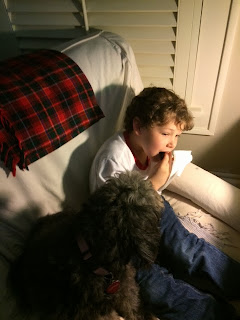 Jacob eating a mini-muffin while Sophie watches jealously
In the continuing effort to keep seven-year-old Jacob from being constantly attached to one kind of digital screen or another, I announced Friday night that we would pot some herbs and then make mini-muffins. I shop at Origins (cosmetics) a lot, and last time I was there they gave me a starter kit for three herbs--chives, basil and thyme (all of which I already have on my porch). Each small pot had a hard cake of dirt in it--Jacob was fascinated watching the dirt cakes expand as we poured water on them. Then we carefully planted the ten seeds in each packet. He hasn't quite got the idea of giving them a tiny bit of water each day, but I do hope they sprout.
Then we moved on to muffins. He wore an apron, dumped the ingredients in the bowl, and with a bit of help from me, used the mixer. Then he spooned the batter into each muffin tin, using two spoons. As he worked, he said, "This is so much fun!" When I told him it would be easiest to use the spoon in his right hand to dip up the batter and the one in his left to scrape it off the first spoon, he said, "You just taught me the secret of cooking." I said, "Well, one of them." "How many are there?" he asked in all seriousness.
I will admit he flaked out on the second pan and spent the rest of the evening watching TV in the chair in my office. But he enjoyed the fruits of his labor. I gave him one muffin, and then when I took the second batch out of the pan I said, "Jacob, something awful has happened. This muffin fell apart. I can't serve it to company. What should I do with it?"
His answer was instantaneous. "Give it to me." And I did.
Here's the easiest muffin recipe you've ever tried:

Spoon into greased muffin tin and bake 18-20 minutes or until toothpick comes out clean. The recipe is meant for regular size muffins, but I found that the mini ones have to bake just as long.

Best thing: one regular size muffin is something like one Weight Watchers point. So enjoy and feel righteous.
Posted by judyalter at 3:23 PM No comments:

Two quick, yummy dishes from the Grandma Moses of Mysteries


In July of 2011, I read an interesting recipe for broccoli salad on The Mystery Lovers’ Kitchen blog. It was a cold dish, but I altered it quite a bit to make this hot side dish. I cooked the vegetables (my husband does not like his broccoli and cauliflower raw), lost one ingredient (that I didn’t happen to have), and changed the sauce completely. A hit with both my husband and me. 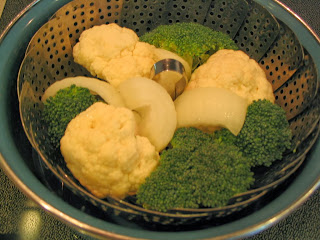 Place broccoli, cauliflower, and onion in steamer. Steam for 15 minutes until tender but not mushy. While this is cooking microwave or fry bacon until crisp. Break or chop into bits.


Prepare sauce by whipping the olive oil, vinegar and honey together. 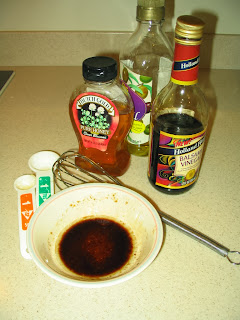 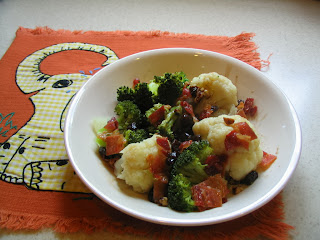 Mix cooked vegetables with sauce (or pour it over) and serve hot with the bacon, nuts, and raisins sprinkled on top.


Here's a bonus recipe. Sorry, no illustrations for this dish.


Brown hamburger until all pink is gone, chopping with a plastic or wooden spoon or spatula to keep the meat from clumping. Add chopped onion and one or two cups of shredded red cabbage. Add your favorite barbeque sauce or a purchased one. Simmer for 15 minutes or so, or until you corral all the family and prepare whatever else you might be serving.


As you may have noted, I’m not big on exact measurements. My favorite barbecue sauce starts with ketchup and usually includes vinegar, mustard, Worcestershire sauce, powdered cloves, a tiny bit of cinnamon, salt, enough water to keep things from burning, and maybe some paprika, chili powder, or pepper. (Those last three are only if the mood strikes me.) Serve hot on buns.


I have served this numerous times to a variety of people. No one has ever detected any difference in either taste or texture compared to Sloppy Joes without the cabbage. (I love to add surprising elements to any meal.)
****
I call myself The Grandma Moses of Mystery. Besides my two mysteries, Yesterday’s Body and Death of a Hot Chick, my other published book is a non-fiction retelling of a young man’s adventures—A Knucklehead in 1920s Alaska.


As I write this post, my daughter is putting the finishing touches on the cover for my new book to be out later in November. Cherish is the title. It’s a ghost mystery for the younger YA reader.


The short blurb—Sophomore Kayla has seen the ghost for years and she wants to make her go away. But instead, it’s Kayla who disappears from her life in the twenty-first century and into Cherish’s life in 1946, only days before Cherish will die.