The story of my turkey-and-all-the-trimmings birthday dinner is pretty much old news now, but for cooks I thought I’d detail what I  did—and the way I coped when I ended up with a lot of deli-style sliced turkey breast instead of the whole breast I thought I ordered.


At first, confronted with all that sliced turkey, I thought I’d serve it cold with hot gravy. Then I thought maybe I’d also offer a cold tonnato sauce, which I would love but others in the family might not. But then inspiration struck, and I posted my dilemma on the NYT Cooking Community page on Facebook. The suggestions—and the birthday wishes—overwhelmed me. But one stuck out: a contributor reported success wrapping turkey slices around portions of dressing.


My chance to have northern-style bread dressing! The southerners in my family always fix cornbread dressing, and I long for what my mom used to make. So that was my first hurdle. I knew how Mom did it, but I didn’t have the proportions. I wanted to use up baguette pieces that had been in the freezer long enough but how much bread? Everything online said, “A small loaf” or measured by weight—I wanted to know how many cups of turn bread pieces. I finally found a recipe that gave me some guidance and then winged it. Here’s what I did;


(Add 1 Tbsp. fresh sage or 1 tsp. dried if you have it—I didn’t; you can also add rosemary but remember a little goes a long way.)


Sauté celery and onion in butter until translucent. Cool slightly and mix with bread pieces in a large bowl. Stir in parsley, thyme, and sage. Stir in broth a bit at a time until you get the right consistency—mixture should be moist but not soupy.


Lightly grease a jelly roll pan or rimmed cookie sheet. Bake at 350 for 30 minutes. Yes, you can do this in a toaster oven. The pan I use in my oven was just the right size.


Let the dressing cool until you can handle it, and then put about a good Tbsp. in the center of each turkey slice. Warning: deli-sliced turkey is fragile and tends to tear when you roll it. If you can get it sliced to order at a deli counter, ask for just a bit thicker slice.


Arrange turkey rolls (my son-in-law called them Christmas roll) in flat casserole dish, lightly greased. Cover lightly with broth—again, don’t get it mushy. You want just enough to steam the rolls but not float them. Cover casserole tightly with foil. Bake at 350 for 20-30 minutes. All you need is to heat it through. 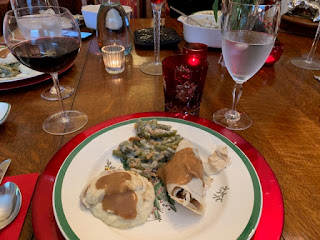 I fixed two rolls per person, found the ladies ate one each, the men two. Served with mashed potatoes, traditional green bean casserole, and gravy, lots of gravy. Since I didn’t cook turkey and had no drippings, I used packaged dry gravy—Pioneer brand—and it was just fine. A good trick for improving packet gravy is to add a bouillon cube or a tsp. of refrigerated bouillon concentrate.


My Christmas menu was a hit and drew raves. 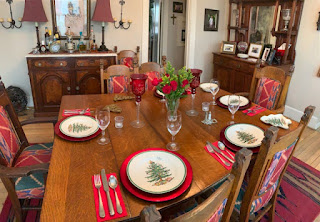 Posted by judyalter at 8:22 AM No comments:

Quick and easy are my go-to ideas this summer 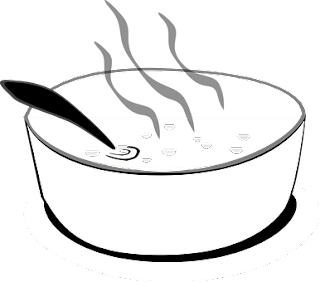 Maybe it’s the heat, but this summer I’m less interested in semi-elaborate recipes and more inclined to go with quick and easy. One night I fed two teen-age boys, so I had to take into account what they will eat and what not. (My grandson, a picky eater who’s getting better, is always suspicious of my cooking, and his mom keeps telling me not to fancy things up for him.) So here’s what may be the simplest chicken casserole ever. I have no idea where I got the recipe.


1 can cream of mushroom soup


2 cups grated cheddar (if I have said it before, let me repeat: grate your own cheese; the pre-grated in the stores has filler in it, like ground up wood or something to keep it from clumping; I have this on the word of the cheese monger at Central Market).


A couple of lessons learned: the recipe called for two cans soup, but I misread (who, me?) and only had one. It was fine the night I served it, but the leftovers were a bit dry. So I suggest the compromise of a half cup of mayonnaise. You can try the two cans of soup, but your casserole may get soggy.


I baked this in my toaster oven in a high-sided round casserole dish, which was a mistake. Somehow that dish focused too much heat on the surface of the casserole, and some of the topping burned. I advise a low, rectangular baking dish—the largest one that will it in your toaster oven, if that is what you, like me, are restricted to using. And maybe lower the temperature to 325 and bake a bit longer.


Which reminds me: one of the best gifts anyone ever gave me is a jelly-roll style pan—like a cookie sheet but with a lip—that fits exactly in my toaster oven. I use it all the time.


In small food processor, blend feta and yogurt until smooth and creamy. (You can experiment with the amount of yogurt—start small and increase if you need to). Chill. When ready to serve, drizzle lightly with honey.


Herb sauce for everything and anything


Sometimes I buy a fresh green herb—often parsley or cilantro—for a specific recipe that calls for, say, 2 Tbsp. finely chopped. Then the rest of the herb (and they’re not cheap) sits in the vegetable crisper until it gets old and I throw it out. Here’s a better idea:


Use on fish, steaks, vegetables, whatever strikes your fancy. May be doubled easily. Will keep a week in the fridge.

Posted by judyalter at 8:45 AM No comments: 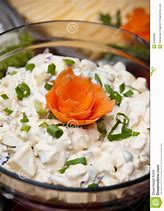 I find myself beginning a lot of food-related posts with, “When I was a kid,” which only tells me that I got my love of food and cooking and feeding others as a child. I credit my mom, who was incredibly patient with me on the kitchen. This memory though comes from a restaurant that my parents took me to more than once. The Kungsholm in Chicago, located in the former McCormick Mansion on the near North Side, offered a true Swedish smorgasbord, a huge table filled with all kinds of delicacies from the three traditional stages of smorgasbord dining: herring and seafood; hot entrees, like Kalvfild a la Oscar (veal tenderloin with shrimp and asparagus tips covered by béarnaise sauce); and salads and cheeses, followed by dessert and coffee or wine. I think it was at that table that I loved to learn fishy things like herring and caviar.


An additional treat but not food related: after dinner we adjourned to a room that had been converted into a puppet theater, and that’s where any knowledge I may have of classic opera came from. I particularly remember seeing Faust there. The characters moved mechanically on tracks hidden in the floor; they were controlled by people behind the set, often young people with operatic ambitions—I had a friend whose brother worked there.


Back to food: last weekend, with neighbors, we had a pot-luck German dinner, and one of my contributions was the herring salad. If you think you don’t like pickled herring, I urge you to try this. I wanted to start with herring in wine, but the grocery gave me dill-flavored—no matter. It was good. This will serve four people as an appetizer or a side.


One large potato, cooked, peeled, and cubed (I find it easiest to boil the potato whole—watch that the pot doesn’t boil dry—and refrigerate. After a few hours, the chilled potato is easy to peel and holds together when you cube it


(The original recipe also called for one-half tart apple, cubed, but I found the hardness of the apple incompatible with the rest of the salad; I also omitted a half cup pickled cucumbers because I forgot to buy a cucumber, but sliced cucumber, pickled in equal parts vinegar and water, might add a really nice crunch without being as hard as an apple)


(you can vary the proportions, but I prefer mostly yogurt0


A pinch of white pepper (if you don’t have white, use black—it’s not the end of the world)


Juice of half a lemon


Add the dressing a bit at a time—the quantities were in metric, and my translation to standard American measurements is loose. You want the ingredients lightly coated but not swimming in dressing.


In case you need a little encouragement to try herring, did you know that this fish helps produce red blood cells, is extremely high in Omega 3 Fatty Acids, promotes healthy bones, stimulates the brain nerve, lowers the risk of cardiovascular disease and type 2 diabetes, is high in antioxidants, and helps improve the memory and avoid dementia. Why, who knew a fish could be a miracle drug!

Posted by judyalter at 8:51 AM No comments:

The Fourth of July has thrown my schedule all off, so here it is Saturday night, and I’m just posting last Thursday’s Gourmet on a Hot Plate blog. Hope you had a pleasant Forth—Sophie and I spent it quietly at home. She is terribly spooked by thunder but not so much so by fireworks. Still, I hated to leave her home alone—and truth be told I didn’t have any better invitations.


So I stayed home and fixed myself summer soup and a big salad. I know I just posted about a wonderful cold soup I’d newly discovered, but this time it is an old favorite that I rejuvenated. I love a good thick split pea soup in the winter, but I also love a lighter spring pea soup once the weather turns warm. I cut the original recipe down to serve two—which gave me a hearty soup supper for two nights.


A pinch or more of dried thyme, according to taste.


Sauté onion, garlic, and celery, celery salt, and thyme in a bit of olive oil until vegetables soften but are not browned. Add potato and peas to skillet and cover mixture with chicken broth. Simmer until potato is soft. Remove from heat, and let it cool a bit.


Puree mixture. You can either do this is a small food processor or in with an immersion blender. Mixture should not be thick—if it is, it will stick and clog the immersion blender (trust me, I found out the hard way). Simply add more broth. When mixture is fairly smooth—a few whole peas just add interest—season with salt and pepper


Serve chilled with a dollop of good Greek yogurt in the middle. Also garnish with finely chopped parsley or sliced scallions if you wish.

Posted by judyalter at 8:14 PM No comments: