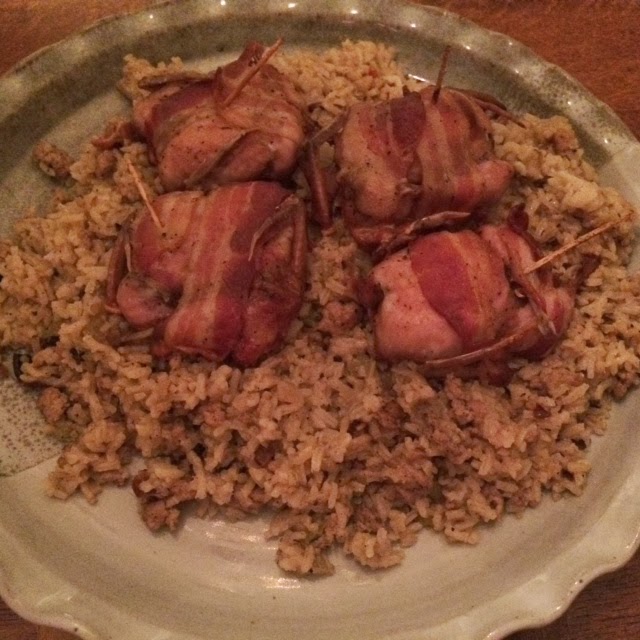 Quail on a bed of dirty rice
Some odd bits of kitchen lore have come to my mind lately. With the approach of berry season, I’ve been thinking about the inevitable stains. Did you know the best way to eradicate fruit stains is to pour boiling water through them. It sounds counter-intuitive, but it works every time. Just be sure it is a fruit stain, not chocolate or something that hot water will permanently set in the fabric.


Lesson learned: never realized that lemon will bleach, but yesterday, making tuna salad, I splattered some on my blue T-shirt, which already had bacon grease splatters on it. I thought, “Just lemon juice. It will dry.” Later in the day I looked down and realized that it had faded the color where it landed. If I had wiped it with a wet paper towel, I bet I would have diluted it and everything would have been fine.


I’m working hard to avoid prepared foods these days as a matter of health. I don’t want the additives that they put into things, so I’ve been creative with two things lately: one by accident. I was making dirty rice and meant to buy Cajun seasoning at Central Market, where they offer bulk spices. But I forgot. So I got on the Web and looked up recipes. To my surprise, it had thyme, parsley, onion powder, garlic powder, and just a pinch of cayenne. I expected a basically red spice but not so. I’ve done the same thing with apple pie and pumpkin pie spices. Why add another rarely-used spice to an already over-crowded shelf?


Making a dish that called for stuffing mix, I made my own croutons seasoned with sage, salt, pepper and thyme. They were so good I almost ate them plain instead of using in the mix. Again, the idea came from the Web. Stuffing mix is nothing but croutons you add water or broth to, so why pay more for added preservatives.


Here’s the dirty rice recipe I used—and liked a lot. It’s my own version of a couple of recipes:


1 4 oz. can chopped chiles or a jalapeño if you prefer


Cook rice and set aside to cool.


Cook bacon until crisp and set aside.


In bacon grease, brown ground pork. When it is browned, add onion, celery, chiles, and brown over medium heat. Lower heat if needed. Add livers and cook until all pink is gone.


Add1 c. chicken broth to the pan and scrape to deglaze the pan. Add Cajun season and boil until chicken broth is reduced to about 2 Tbsp. (If you prepare this ahead, you may have to add more broth when reheating to serve.) Add cooled rice to mixture in the skillet and stir well. 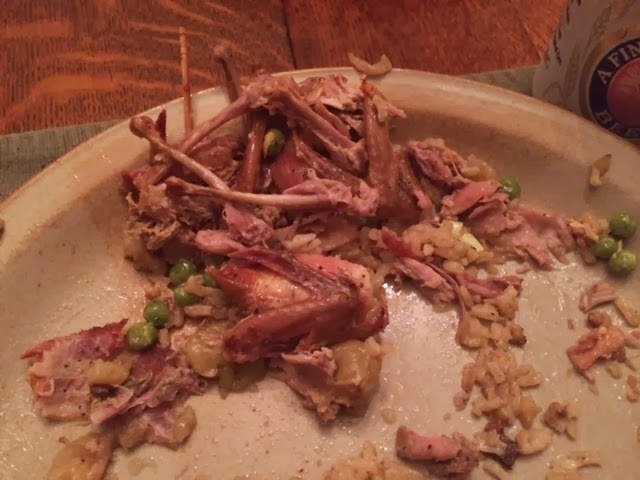 Posted by judyalter at 7:18 PM No comments:

One of the things I love about my retirement life is that I have friends of all ages. I hope they keep me current and prevent my becoming an old stodge. Last night I had a couple in their thirties that I had met during the course of daily life and come to like. They recently had a great loss, and I wanted to reach out to them, which is hard when you're acquaintances and haven't quite moved to the friendship level, though I sense that coming. So I did what I do best--I invited them to dinner.
Unfortunately, it was not one of my best dinners. I have a minute steak with anchovy butter recipe that I'm anxious to try, but they didn't strike me as steak people. I inquired if they liked fish. They did. So I did something I won't try again--I pan-fried trout filets. Only instead of the lovely filets I put in the pan, I served trout hash. I had some of the "hash" tonight--livened it up with more salt and pepper and some lemon butter--tasted much better, still looked awful. Honest, instead of figuring out what I did wrong, I'm just not going to try that again. I'll eat my trout in restaurants and stick to fish like sea bass and salmon that I know how to cook.
The rest of the meal was better, and they really liked the roasted vegetables. Here's what I did:

Peeled and cut in large chunks:
3 beets (I bought the greens and ended up not doing anything with them)
1 large baking potato
1 sweet onion
1/2 lb. large mushrooms (stemmed and cut in half)
a good-sized bunch of baby carrots (for eco purposes you could clean and chunk whole carrots--which I should have done--baby carrots have been soak in something, chlorine I believe, which is supposed to be harmless but why eat it?)

Sprayed a baking pan and dumped the veggies in. Seasoned with salt and pepper to taste and about two Tbsp. each of dried oregano and basil. Poured vegetable oil over them (I think olive oil would be too strong here and I tried be moderate with the oil--you don't want greasy vegetables) and baked 15 minutes. Pulled the pan out to stir and added:

a handful of green beans, stemmed

Baked another 15 minutes. (Actually I baked it longer because we got too talking, but it was too much; the green beans were way overdone)

You can add or subtract any vegetables you want though root vegetables are particularly good.

Another thing I did that turned out well was to make my own ranch dip (I'm trying so hard to avoid preserved foods):

about a quarter cup Greek yogurt
about 2 tsp. mayonnaise
chopped chives (it killed me to buy them but my annual crop is hibernating right now)
onion power and garlic powder--maybe half a tsp. each

I served this with Central Market organic black pepper and sea salt potato chips. So good! This doesn't make much, so you might want to double the recipe.
Posted by judyalter at 5:44 PM No comments:

My day started out hectic but ended being lazy, quiet--and cold. I intended to have breakfast ready by nine, so my Houston family could be on the road by 10:30. But as the weather grew increasingly threatening, Colin said he wanted to leave by nine. I had hesitated to bang around in the kitchen for fear of waking his family, but he told me to go ahead. I was making a new recipe I somehow couldn't wrap my head around so Colin read while I cooked--and we both modified the process as we went along.

Tomatillo sauce - the recipe called for prepared sauce but I found a simple recipe on the web and made my own, substituting a 4 oz. can chopped chillies for one jalapeno

Corn tortillas - recipe called for the old technique of dipping into oil in skillet briefly. Instead I sprayed a cookie sheet, then sprayed each tortilla separately. Recipe called for overlapping in the cookie sheet. In retrospect, we decided we would have put the tortillas in the oven alone briefly to make them crisper.

Eggs--the recipe called for fried but I didn't think my family liked fried, and we served scrambled. Then they all sat at the table and talked about how much they liked fried eggs! Scrambling was easier.

Lay tortillas on cookie sheet and bake to crisp.

Bake until cheese is melted and dish is heated through.

Remove tortilla/sauce/cheese base from oven and top with eggs. Pass extra tomatillo sauce if wished.

My travelers were all out the door by a little after ten. I washed dishes (lots of pans seemed involved between bacon, eggs, and baking tortilla mixture). Then spent the day at my desk, reading the newspaper and email, etc. And a long nap. Sophie, worn out by the excitement, slept all day. She enjoyed all our guests--especially the children.

Posted by judyalter at 3:43 PM No comments: