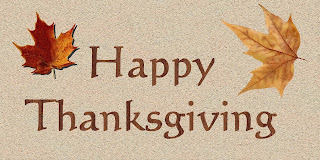 I hope your table was laden with whatever traditions you cherish,
and surrounded by people you really care about,
and that together you gave thanks for all that we share.
Tomorrow is time enough to worry
Today we celebrate!

Posted by judyalter at 3:08 PM No comments:

Email ThisBlogThis!Share to TwitterShare to FacebookShare to Pinterest
Labels: #Thanksgiving

Nibbling before the Thanksgiving feast 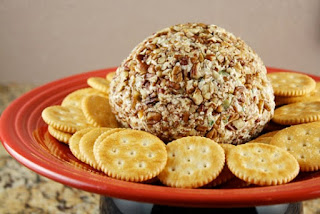 The Thanksgiving menu is pretty standard—a few iconoclasts eschew turkey, but for most of us it’s turkey, mashed potatoes, green bean casserole, and all the usual side dishes. But we can and do vary appetizers, and I’ve been talking appetizers with Jordan. She’s hosting her first big holiday meal—for Christian’s family—and I won’t be in town to help her. So we’ve been planning and going through old recipes (my idea of fun!).


To her delight, she found a recipe that was always her favorite. It requires Beau Monde seasoning, which is something I don’t usually keep and maybe you don’t either, but it should be in the supermarket. If not, it’s offered on Amazon. The big trick here is to find a round of bread, preferably pumpernickel.


Holiday dip in a bread bowl


Loaf of round bread, preferably pumpernickel


Slice top off loaf of bread and hollow out, dicing removed bread into cubes for dipping. Keep bread cubes airtight until serving time.


Mix all other ingredients thoroughly and spoon into bread bowl. Chill.


Let the cheese soften to room temperature and mix thoroughly. Add Worcestershire, onion, horseradish, and half the parsley and pecans. Mix thoroughly and shape into a ball. Do NOT do this in the food processor, as it will become too runny. Even a mixer makes it too smooth and creamy—wash your hands thoroughly and dig in, so the finished cheeseball has some texture and credibility. Roll the ball in the remaining parsley and pecans. Chill. Serve with crackers. Leftovers will keep a month in the freezer, and you can always reshape the bowl. Sometimes you may want to freshen the outside with more chopped parsley and pecans.

Posted by judyalter at 11:25 AM No comments: 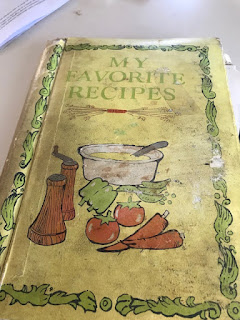 Several years ago I lost a lot of books when the flat roof over my family room failed during an incredible rain- and hail-storm. The room was an add-on before I owned the house and was being re-roofed at the time. Most of my good-sized collection of cookbooks were among the books damaged beyond saving—they ranged from slim paperbacks to lovely coffee table books. Unbeknownst to me, Jordan had saved some and has had them in a cupboard in the house all this time. We got to talking about a dip she particularly liked, and I said I thought the recipe was in an old book that held several of my favorites.


To my great joy, she produced the book yesterday. It’s a much battered and worn scrapbook type thing, titled My Favorite Recipes, where I pasted in recipes that I’d collected from various places, many of them printed in the magazines and newspapers which were my favorite sources before the internet. But the greatest finds were some of my mom’s recipes—what she called Alice MacBain’s Bread, her yeast rolls that the kids still clamor for the holiday dinners, the cookies she made every Christmas. Mom signed her recipes GM for Grandmother or GW for Guess Who. In one instance, after GM, she added (not General Motors).


There are other old friends I was glad to see again—my grandmother’s banana drop cookies, which I used to make into cupcakes when my kids were little. I cannot tell you how many batches I made just to avoid throwing away two overaged bananas.  Mary Helen’s Mother’s Coffeecake is aa Bundt cake I’ve made so often I need no recipe, but I’d need directions for the green goddess dressing, which I remember as excellent, or the Gore Blimey Quiche—spinach, bacon, mushrooms and Parmesan. My chili recipe is here—another I now do automatically. Things I’ll probably never make again: Russian kasha, red beet eggs, Russian black bread. (If you see a bit of a trend there, yes, these were recipes chosen to please my ex-husband, who was of Russian descent or so he thought—they tell you how old this cookbook is!)


A recipe I’m glad to have provides simple directios for Krispie Orange Cookies, a holiday tradition when I was a child and then when I had children. They require cookies cutters, and I inherited Mom’s good, old-fashioned metal ones—so much easier and cleaner to use than today’s plastic versions. Mom had a Santa, in profile with a pack on his back, a Christmas tree, a bell, a donut-shaped one we made into wreaths, and an oversized gingerbread man. We decorated with white, red, and green icing, sprinkles, and silver shot. After Colin, my oldest, married, his wife took over the cookie-making, and I passed along the cutters. Colin likes these cookies soft, but I keep telling him they need to bake just a bit longer for crispness.


Bake 10 minutes at 375o but watch carefully. They burn before you know it.


PS: We’re still looking for Jordan’s dip recipe—all I remember was you served it in a round pumpernickel bread bowl, and it had Beau Monde seasoning. It will show up here if we find it, but so will others from My Favorite Recipes. 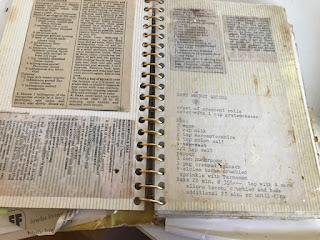 Posted by judyalter at 9:50 AM No comments:

Chickpeas are something I never thought much about. They did not appear on the table in my childhood home, and somehow all these years cooking I didn’t run into them. But yesterday I planned to cook a New York Times recipe for Crispy Lamb Meatballs with Chickpeas and Eggplant. At first, I thought I’d just leave the chickpeas out, but a friend encouraged me to include them. So when I ordered groceries over the weekend, I ordered chickpeas, expecting canned. They were dried, and there began my education.


Dried chickpeas, like various dried beans, must be soaked before cooking. You can use that trick of adding a tsp. of baking soda to the water if you want, but the main thing is to soak them overnight in lots of water, because the expand a great deal during soaking. You can hurry the process up with an Insta-pot or pressure cooker, but I went for the old-fashioned method.


In the morning, I drained and rinsed them, covered generously with fresh cold water (at least two inches above the top of the peas) and brought it to a boil. Then instructions said simmer for one to two hours. I hate undercooked beans, so I went for two hours and discovered that with a lid slightly askew on the pot and the heat set at medium low, my hot plate holds a nice simmer. After two hours, they were cooked—and, to my surprise, tasty.


Then the day went awry (see my blog, https://www.blogger.com) and I ended up not making the dish. So there I was with a pound of cooked chickpeas. First thing I learned: they freeze beautifully. Second thing, there are lots of things to do with them—put them in the food processor with tahini and seasonings and make homemade hummus (so much better), scatter them in salad, put them in soups and stews, use them for a vegetarian curry, make fritters or patties out of them, use in place of tuna in a salad, put them in scrambled eggs. The internet is alive with recipes and suggestions.


My favorite: roast chickpeas for a snack instead of chips. Take a pound of cooked chickpeas (or canned) and toss with olive oil (1 tsp.—too much oil will make them soggy) and 1/4 tsp. of salt, pepper, and the seasoning of your choice—anything from chile powder to thyme and rosemary. For even coating, put the ingredients in a large baggie and shake well. Put them in a cold oven and roast at 425o for 20-30 minutes or until crisp. The chickpeas will lose their crispness as they cool, so serve them as soon as they cool enough to handle. Even after they lose their heat and soften, they’re still tasty.


Chickpeas are a staple for vegetarians and vegans for good reason. They’re plentiful, cheap, low fat, and full of nutrients—the fiber, protein, vitamins, and minerals we all need. Studies show they may help control blood pressure, improve digestion, and prevent anything from diabetes to cancer. On a diet? These are great because they give you a feeling of having eaten without adding calories.


As for the Keurig, I’ve been using it to brew my single cup of tea for years. In fact, I’m on my second machine. But my conscience has increasingly bothered me—K-cups contribute an enormous amount to our burgeoning landfills and are a disaster for the environment. Besides, I never ever took mine apart and cleaned it with a vinegar solution as you’re supposed to do at least every six months.


So when my Keurig bit the dust this week, making only an eighth of a cup each time, I sent it to Goodwill, where they will refurbish. I’m making my tea with an electric teakettle but still exploring various options. If I settle on the teakettle, I’ll get an infuser—no sense adding that daily teabag to my footprint. I tried to tell one of my daughters not to use a plastic straw, and she said dismissively, “What difference does one straw make?’ That’s just it—it’s not one straw but the millions (literally) that are discarded daily. I figure the same is true of tea bags.
Posted by judyalter at 9:06 AM No comments: