A new approach to taco salad

Normally, when I make taco salad I use Ranch Style beans and a packet of taco seasoning and leave out the usual Catalina dressing--don't much like it, and I always have it left over in the fridge until I decide to throw it out. But lately I'm on a huge kick of avoiding prepared foods. I have a list of companies that Monsanto has dabbled their chemical hands in, and I avoid those products. So no more Ranch Style beans, even though they were a beloved Fort Worth product until ConAgra bought them out. And no Catalina dressing--in fact, no bottled dressings except Newman's Own--and no packet seasonings.
So I went online in search of a taco seasoning mix--it isn't mine, so I don't feel free to share it, but it had chili powder, paprika, onion powder, salt, garlic powder, cumin oregano, cayenne and black pepper. For proportions, check http://www.diylife.com/2008/04/10/taco-seasoning-from-scratch/
It's for a pound of ground meat, but I used it on a pound and a half, and it was great. Then I added tomatoes, avocado, forgot the onion (oops!), and romaine. Since Elizabeth was eating with us, we took out her portion before adding the cheese and dressing (she's gluten- and dairy-free). Then I added grated cheddar and the dressing.
Dressing was a bit of a problem. I looked at several recipes online that called for picante sauce, of which I'm not particularly fond (bad thing for a Texan to admit, I know). But I found one with a sour cream base, Italian salad dressing  (I used Newman's Own Vinaigrette), lemon juice, minced onion (forgot it again), a tiny bit of chili powder and salt and pepper. Find it at http://www.cooks.com/rec/doc/0,1715,152165-25199,00.html. We decided it was delicious and just right.
Served with a platter of fresh, Texas-grown corn on the cob. No dessert needed. Yum!
Posted by judyalter at 6:48 PM No comments:

I'm not sure when Father's Day became associated with grilling. To my ancient memory, it was not a day to make Dad work at the grill (to my knowledge, my father never grilled anything--cooking the food was woman's work, but then he was of two or three generations ago). Instead, it was a day to wait on Dad hand and foot and present him with his favorite meal, without him having to lift a finger. But nowadays, we expect him to grill.
Christian lived up to that tonight. Because they have two new dogs at their house, as of yesterday, he elected to grill rather than go out. He does terrific hamburgers and does mine rare, the way I like it. So I said I'd bring a can of beans (had it in the cupboard) and potato salad--did he want that wonderful recipe I have for a lemon-y potato salad or a more traditional mayonnaise one (I do not like mustard potato salad). To my surprise, he said German and then I remembered he loves the German potato salad I make. I'm afraid I may have posted it before, but if so I apologize. It's fairly easy (you're always going to have to chop if you make potato salad) and reheats beautifully. Also I think it's good cold the next day, maybe with a  dollop of mayonnaise, but it is a hot potato salad. So here it is again:

Fry three or four slices of bacon crisp and set aside to drain.

Drain off the grease in the skillet, leaving just enough to sauté vegetables.

Sprinkle with three Tbsp. flour, stirring to make a paste--if it's a bit too dry, add back some of the grease (you can use vegetable oil, but the bacon grease imparts wonderful flavor and you're going to add the bacon anyway, so.....)

Mix 1/2 cup water and 1/2 cup apple cider vinegar; gradually stir into pan until mixture thickens, then add more liquid until all is added

Add about a Tbsp of mustard

Stir in sliced potatoes. Note: This is the one time in my life I use canned potatoes, because they hold together better than if I cook my own new potatoes--but that's an option. I used to be able to find pre-sliced canned potatoes, which made it really easy but lately I've only found whole and had to slice them (oh, hardship!). If you want to use new potatoes, I'd cook them and cool in refrigerator overnight; then peel and slice.

Crumble the bacon and stir in gently so as not to break up the potatoes.

Sprinkle with chopped parsley just before serving (Christian doesn't like "little green things" so I omitted it for him).

Cooking hint: I know how bad bacon is for you. Someone told me recently every piece of bacon you eat takes nine minutes off your life, but who's counting? There are sometimes when a bit of  bacon grease makes all the difference in the world. I keep a grease can in the refrigerator (my daughter is horrified and keeps hers under the sink--I tried to explain that it would go rancid more quickly at room temperature, but got nowhere). But I keep a separate small jar, with a lid, of pure bacon grease. Diet or not, it comes in handy sometimes.

Posted by judyalter at 7:05 PM No comments:

A cooking weekend--with a recipe

Sometimes I think I could be a hermit, stay home all day to write and cook. Trouble is, of course, I'd have to have people to eat my cooking. But this weekend, I cooked to my heart's content. Last night for dinner, I had salmon marinated in maple syrup, mustard and  bit of salt. You're supposed to grill it on a cedar plan, and I'm sure that would be better but just for me I did it on the Jenn-Air grill. And got it just right--barely cooked in the middle. Got the recipe on a recent Mystery Lovers Blog so you can easily look it up.
I roasted asparagus just to have it--darn! Overdid it again, and this time I really tried to watch. I boiled corn, though Jacob has decided he doesn't like corn. Let's see--that adds to a list of recent dislikes that now includes blueberries and blackberries, which he used to love.
Today I made green pea hummus for dinner tonight. Basically a mix of store-bought plain hummus, a pkg. of frozen baby peas, olive oil, lime juice,, bay leaves, salt and cayenne. Next time I'd perk it up with a little more lime juice and a pinch more cayenne--I'm always cautious when using that. I got it from our local newspaper and no source was quote, but I bet you could find something similar on Google. It was tonight's appetizer for my gluten- and dairy-free friends, along with gluten-free rice crackers. It would be good with veggies, too.
Tonight I fixed an old-stand-by. Years ago a friend gave me a cookbook, A Jug of Wine, by Morrison Wood. Mr. Wood subsequently published another cookbook, though I forget the title and don't own it. But from friend Sally's copy I got the recipe for Wine Casserole. When I made it, it came out so much like Sloppy Joe that's what we called it. You can either eat it on a bun or out of a bowl. It was a staple on our table--cheap for a single mom to feed four kids, and they loved it.
Megan wrote me some time ago for the recipe (before my cookbook came out) and she made it. Brandon, her husband, said, "It's good, but it's not Sloppy Joe." Megan wrote caustically to say apparently she was the only child raised to think wine was an essential ingredient of Sloppy Joe. Here's the recipe (and it doesn't hurt if you change it a bit, leave something out, etc.)


1 lb. ground beef
1 15-oz. can of beans (any kind you want), rinsed and drained
½ c. chopped onion
½ c. diced celery
2 Tbsp. bacon drippings (If you can bring yourself to use it in this health-conscious age, use vegetable oil, but the bacon flavor really makes a difference.)
1½ c. ketchup
1½ Tbsp. Worcestershire
Dash of
1 tsp. salt
⅛ tsp. pepper
¼ tsp. oregano
¼ c. dry red wine
1 Tbsp. A-1 sauce

Posted by judyalter at 7:34 PM No comments:

What do you know about what you eat? 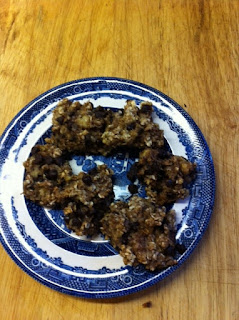 With so much concern being voiced all around us about processed and genetically altered foods, I am becoming more and more aware of what I put in my own body (maybe too late for thatJ) and what I feed family and friends. My mom was an early advocate of Adelle Davis, and I always thought, because of Mom’s influence, I was a healthy cook and eater, but this is a whole new world (Adelle Davis and Mom would both turn over in their graves). Monsanto is at present the big bad evil, and I was discouraged to find that so many of the brands I take for granted are companies owned or influenced by Monsanto. To find a list, go here: http://solari.com/blog/monsanto-companies-do-not-buy/ For instance, I buy Hellman’s Mayonnaise because I like the idea that at least one kind of it is made with olive oil; I’ve been making casseroles with Campbell’s soup since I learned to cook, but it’s homemade white sauce for me from now on (and watch the kind of flour you use). With ConAgra on the list, I may have to rule out Wolf Brand chili (okay, I make pretty good chili from scratch) but I have several recipes with Ranch Beans at the core. Some products on the list I never use—Kid Cuisine, Tombstone Pizza, Loma Linda, Lean Cuisine. But I’m going to have to carry the list to the grocery with me.


And for you grow-your-own folks, which I’d like to be, Monsanto has its sticky icky fingers into a lot of seed companies. Go here for a list of Monsanto-free seed companies: http://occupymonsanto360.org/blog/2013/06/01/monsanto-free-seed-companies/


I was pleased to find a new meat line from Oscar Meyer—Selects. I bought chicken breast hot dogs, labeled all rib meat, no preservatives. Elizabeth, my food label expert, read the label and agreed they look good. And Oscar Meyer is apparently untainted by Monsanto.


I am fortunate (in some ways) to have a gluten- and dairy-free friend living in my garage apt. (Sometimes, when she will be eating with us, meal planning is hard, but she’s very adaptable and self-sufficient.) She’s well versed in reading labels because her health demands she know what's in a product, and she helps me steer the course. This morning we made really healthy cookies from a recipe that’s been floating around the web this week:


Mash it all together.


Grease cookie sheet (we didn’t and learned the hard way), drop by teaspoons onto sheet (Elizabeth does that so precisely) and bake 15-20 minutes at 350.


The house smelled heavenly even before we got them in the oven and better yet while they baked. They’re chewy with a different texture than what you expect from a cookie, but they’re delicious. Waiting for six-year-old Jacob to arrive tonight and give his verdict.
Jacob's verdict was predictable: he doesn't like them. A texture thing, I suspect.