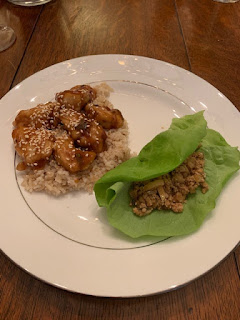 Sometimes it’s lovely to have someone else do the cooking. Christian is the resident chef at our little Alter/Burton compound. I am just the sous chef. He frequently cooks when he gets home from work, and sometimes he’ll spend most of Sunday afternoon in the kitchen. Asian is his specialty. Recently I  pointed out a non-recipe to him that I thought he’d like—just a description of put a little of this in the pan and then a little of that, stir, etc. His response was “I need more structure than that. I’m going to make General Tso’s chicken.”


I’d seen references to this in Sam Sifton’s New York Times column but didn’t know what it is, so his remark sent me to the Internet. Basically it’s chicken thigh meat sliced or cut into pieces. deep-fried, and serve with a sweet/spicy sauce. But the story behind it intrigued me. General Tso (the name can be spelled a hundred different ways) was a statesman and military leader in the Qing dynasty (1644 – 1912). But there is no recorded connection between the general and the dish, and most people in the Hunan province, including Tso’s descendants, deny any knowledge of it.


Apparently, it does derive from Hunanese cooking, but the version we know in this country is much sweeter. Again, there are countless stories of its origin, several relating to one Chinese chef or another who came to America to open a restaurant. The linguistic peculiarities of the Chinese language, especially homonyms, may also account for the name. But the most colorful story I read is that some think the sliced and diced chicken mimics the treatment the general gave to his enemies in battle.


There are also a hundred ways to make this dish—I exaggerate only a bit. If  you’re still hungry for it after the slice and dice story, here’s Christian’s recipe, slightly edited.


Toss chicken with corn starch and set aside.


Fry chicken pieces in oil until crisp, tent on a plate, and set aside.


Return chicken to the skillet and add the sauce, stirring until it is slightly thickened.

I think knowing my taste Christian went a little light on the red pepper flakes, but the final dish was so good! He served it with lettuce wraps for which he used ground turkey because no ground chicken was available.
Posted by judyalter at 9:30 AM No comments:

Cooking off the top of your head, or tuna casserole deconstructed 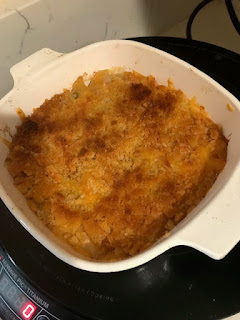 Last night was one of those, “What ever shall we have for supper?” nights. Christian would be late coming home, Jordan was going to lay out a buffet of leftovers for Jacob, and she wanted pizza. None of that appealed to me. I vacillated, mentally inventorying my pantry—spinach fettucine in lemon butter? Tuna casserole? Tuna salad? Scrambled eggs”


Finally, sitting in the patio with wine, about 6:30, I announced, “I’m making myself a tuna casserole.” Jordan does not like the idea of cooked tuna, but I decided I would have leftovers for a couple of lunches and that would be good.


I’d been reading a Sam Sifton column where he talked about cooking without a recipe—he usually does that on Wednesdays. He’d caught Christian’s attention with his use of the word “slurry.” I looked it up and discovered it is not primarily a cooking term—refers to a liquid with particles in it. Let’s just leave it there. And my neighbor, Mary Dulle, had described how she made gravy for hamburger steak out of onion, butter, demiglace, and pan drippings. I called it cooking off the top of your head.


Not only would I make the tuna casserole without a recipe, it would be a cook-with-what-you-have dish. Wasn’t sure how that spinach fettucine would taste with tuna, but I had some rigatoni. Cooked that (too much, so there’s a bit of naked rigatoni in my fridge) and started on the main part of the casserole. Sautéed diced celery and a sliced green onion in a knob of butter, sprinkled a good Tbsp. of flour over the vegetables and stirred. Then I added enough white wine to make Sifton’s slurry and let it simmer and thicken while the alcohol cooked off. 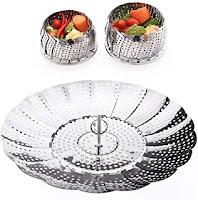 I was not going to use canned mushroom soup, though I’ve done that all my life with tuna casserole. Lately I’ve read such disdainful comments about canned soups on cooking sites that I decided to improvise. But I didn’t have milk or cream to make a sauce out of the roux. Instead I added a generous Tbsp. each of mayonnaise and sour cream and stirred it all in. Then salt, pepper, a splash of Worcestershire, and a handful of frozen petite peas. Oh, and don’t forget the tuna—good quality albacore in water, drained and flaked right into the skillet. And add that pasta that’s been draining and cooling (I discovered my small vegetable steamer is great for draining everything from fruit to pasta—thanks to daughter Megan for that idea.)


This all went into a medium-sized Corningware dish. No French’s fried onion rings either—grated sharp cheddar under a generous sprinkling of crushed Ritz crackers.


All this was easy to do on my hot plate and then in my toaster oven. And it tasted so delicious—I can hardly wait for lunch today.


Ingredients (you’re on your own for measurements):


Pasta of your choice


Bake at 350 for 20-25 minutes or until heated through and crumb topping is golden. 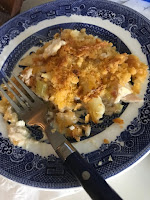 Posted by judyalter at 9:25 AM No comments: 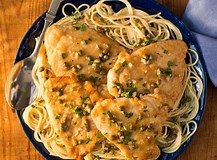 Meet the piccata family—chicken, veal, swordfish, and what have you. We tend to think of chicken piccata as a dish, but really piccata is a cooking method. In Italy, where veal is the preferred primary ingredient, piccata means cooked in a sauce of lemon, parsley, and butter. The word comes from the Italian piccato which translates as “larded.” I haven’t quite figured out the relationship between piccata as we know it and larded, but there you have it. I have used the technique on Dover sole—that delicate fish responds well to the simple lemon sauce.


We had chicken piccata last night—it is one of Jordan’s favorite meals, and I have come to think of it was Christian’s signature dish. I forgot to take a picture, so will make do with clip art. Chicken is the most common version in the States, but there are a couple of things to remember as you prepare it. Always butterfly the chicken breast before you pound it flat. Your goal is an even thickness of no more than a quarter inch. That way each bite is saturated with that luscious sauce. The meat is most often dredged in flour, but I have found using a mixture of flour and cornmeal gives a nice, crisp surface to it. Last night Christian added some half-and-half for a creamier sauce than usual. Capers are another frequent addition to the sauce. And a clove or two of garlic sautéed with the meat adds a nice dimension. Piccata is traditionally served with pasta.


Here’s the recipe I have used for years.


Mix milk and egg in a shallow bowl; mix flour and cornmeal in a second bowl.


Pound chicken until it’s as flat as you can get it. Dip breasts in egg mixture and then in flour/cornmeal mixture. Melt butter in skillet over medium heat. Sauté chicken breasts until browned on both sides, adding more butter if necessary. If they are thin enough, they will cook quickly. Remove to platter and tent with foil when browned and cooked through.


Reduce heat. Add lemon juice to skillet and then bouillon/wine mixture. Stir to loosen browned bits from bottom of skillet. Return meat and cook five minutes until warmed through. (You may want to double the sauce since it’s also wonderful on the pasta.)


Serve with thin lemon slices and chopped parsley for garnish—add those capers if you wish.

Posted by judyalter at 8:50 AM No comments: 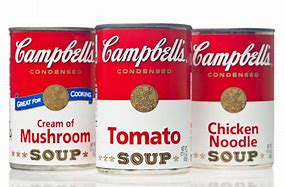 How many of these dishes or ingredients can you properly identify without doing an internet search: japchae, bigos, pernil, beef suya, channa masala, brodo, branzino, goetta. Pavbhaji. This is a brief list I’ve compiled from reading various recipe sources, principally Sam Sifton’s New York Times cooking column which comes four times a week, and which I eagerly anticipate. The list would be longer, but sometimes I can’t read my own handwriting. These are dishes that come from India, Africa, Asia, Central Europe, and Latin America—and none are common on American tables.


I’m all for culinary diversity, and I love experimenting—tonight’s menu at my house, to welcome a daughter and grandson, will be Indian-ish Nachos. Can’t get more diversified than that. But at the same time, I am coming to believe that American cooking is being left behind in a rush to embrace other cultures. Okay, I admit I am not a fan of tofu, nor do I like quinoa. I am not about to eat a seaweed salad, and I am leery of squid. But I will eat liver and onions or raw oysters and as a child I liked fried lamb kidneys. My local son-in-law thinks I eat a lot of weird things, but I also love casseroles and kitchen-sink soups.


James Beard fought this battle in the sixties and seventies, becoming the great advocate for American food, in spite of his admiration and affection for French ways. Beard studied recipes from ladies aid societies, missionary and hospital volunteer groups, women’s exchanges, even the legacy of immigrants, and he came to embrace such dishes as chowder, fried chicken, creamed chicken a la king, chili con queso, and stuffed oysters. He translated French traditions, such as mousse be it salmon or chocolate, into dishes that the home cook could duplicate. A child of the Pacific Northwest, he championed regional American cooking.


Beard never went so far as to embrace canned soups, that staple of American casseroles, but he did acknowledge the occasional usefulness of mixes and frozen foods. Periodically it’s fashionable to decry canned soups, especially for their high sodium. I have seen elaborate directions for making your own version of, say, cream of celery soup—complicated and not different enough to warrant the trouble. Even Joanna Gaines used Campbell’s cream of chicken in her chicken enchiladas--I recently found the recipe.


American cooking, even recipes that call for canned soups, interests me more these days, so here are two family favorites. One uses that non-food that true chefs detest, Velveeta, and the other, something I would ordinarily avoid—Minute Rice.


With thanks to lifelong friend Barbara Bucknell Ashcraft, who got this from her stepmother—yep, Louella.


1 can Campbell’s cream of celery soup


In honor of my oldest son who loves this stuff.


Brown hamburger and sausage, breaking up the chunks of meat until it is all crumbly. Drain and put in the crockpot. Add Velveeta, cut in chunks, and melt. Add  mushroom soup and picante sauce (really works best if you use Pace).


Serve with tortilla chips. I used to put chips in a soup bowl, spoon the dip over t, and tell the kids it was supper. They loved it.

Posted by judyalter at 9:29 AM No comments: