Tuna Salad--love it or hate it! 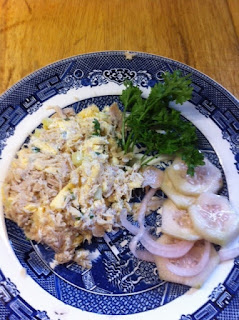 Tuna salad! I love it. I can tell you what restaurant has the best in town, what the least satisfactory. But the very best is made in my home kitchen.


For years I had a standard recipe: 1 can albacore, lots of lemon juice, a couple chopped scallions, and mayo, with maybe a touch of Dijon. Sometimes it ended up pretty soupy because I used to much lemon juice, but Jordan loved it that way and that’s what Jacob expects of tuna salad to this day. Once in a while we added cottage cheese to it—scrumpsh!


But I’ve made some refinements of late. For one thing I order my tuna from a cannery in Oregon. Two or three years ago I read a food book titled, Jam Today: A Diary of Cooking with What You’ve Got. As the subtitle implies, the author Tod Davies advocates looking in your cupboard instead of rushing out to the store. I know I have several dozen meals in my pantry if I’d ever sort it out. Of course, Davies had one  big advantage—a husband who is an avid organic gardener. So, many nights she simply wandered out into the garden to see what was good. Reminds me of the Central Market cooking class in which the class trails behind the chef as he decides what’s fresh and good in the market that day and then cooks a meal with his picks.


Davies mentioned that she always orders tuna from Pisces Cannery. It’s only available by the case of 24 cans, but I can usually find someone to split with me. I’ve discovered they also have outstanding salmon—but only occasionally, depending on the market. I only have two cans of salmon left and I’m hoarding them. For a brochure, write to Sally Bogardus, Box 812, Coos Bay OR 97420 or call 541-266-7336


But back to tuna, here’s how I make classic tuna today:


Optional: One good squirt of anchovy paste. No, you don’t taste anchovies—but it sharpens the taste of the tuna.
Eat as salad or serve in tomato, avocado or sandwich, though I avoid the bread--hides the good taste of the tuna.


Here’s an old recipe I hadn’t looked at in years but recently made and found it so good I made it again. It’s intended as filling for pasties, but I like it fine just as salad.


Chill and serve—I liked pickled cucumbers as an accompaniment


If you want pasties, use


If using biscuits, roll into 4 in. oval; place 1//2 cup tuna mix in each of six biscuits and top with remaining biscuit and seal. Brush with melted butter and let stand 15 minutes. Bake 15-18 minutes at 450 on ungreased cookie sheet. Do not let bottoms burn.


To use Crescent rolls, separate into rectangles, and treat like biscuits. Baking time is about the same but keep an eye on them.
Posted by judyalter at 10:52 AM No comments:

Another hectic day of family and friends and food. This morning by 9:30 I was feeding my oldest son and youngest daughter and two six-year-old boys breakfast, though everyone had different tastes. Colin and I ate smoked salmon and cream cheese, his on a bagel, mine on rye toast. His son, Kegan, my youngest grandson, explained to Jacob, "It's sushi. I don't eat it!" Jacob: "Ewww" or something similar. Jordan had cottage cheese and half a bagel with cream cheese while the boys ate Krispie Kreme donuts. By 10:30 they were off--Colin and Kegan back to Houston, Jordan and Jacob to do errands and chores--she was proud that she fixed the leaking flapper in a toilet. And I was fixing dinner for seven.
Christian had a hard week, so even though we were celebrating the 2nd birthday of my dog, Sophie, the menu catered to Christian's tastes. Sophie had no place at the table. We had a ring sausage that Elizabeth and Christian like--I found it to dry and spicy. I fixed Christian's favorite German potato salad and the giant stuffed hamburger he'd asked for last week. He said, "We haven't used your grill in a long time. Remember that giant hamburger you used to make."
So here it is, a recipe from Aunt Amy, my sister-in-law from New York who is much loved by all my children.


Melt butter in saucepan and remove from heat. Add stuffing mix, egg, mushrooms, beef broth, onion, almonds, parsley, and lemon juice. (It’s remarkable what adding lemon or lime juice does to a variety of recipes!) Mix well and set aside.


Combine beef and seasonings to taste; divide in half. On sheets of waxed paper pat each half into an 8-inch circle. Spoon stuffing over one circle of meat to within 1 inch of edge. Top with second circle of meat and peel off waxed paper. Seal around edges and invert into a well-greased grilling basket. Grill over medium heat about 10-12 minutes per side. Cut into wedges and serve. Makes six servings.


Don’t have a grill or it’s too cold outside? Broil it in the oven—it still tastes great. Just don’t overcook it until it is dry.

A quick appetizers moms should love

This will be brief, because thoughts about Mothers Day, my mom, and my children are rattling around in my brain, and I'll post them later on Judy's Stew. But I'm having a good Mother's Day weekend--yesterday Jamie and his three girls (that includes my lovely DIL Melanie) came for an early supper between Maddie's basketball games in a tournament--she was wiped out but the rest of us had a good time. And I was, as always, delighted to see them. When the girls were little I saw more of them but now they are both so busy with activities and school and friends, there's precious little time.
Today I go to Jordan's for a gathering with Christian's family. It's pot-luck and I'll take an appetizer. His dad doesn't eat anything with onions; his sister is a vegetarian; he doesn't like mushroom or artichokes. There went some of my standard recipes.
So I made a Taco dip--taco seasoning in mayo, sour cream and buttermilk, but I made my own taco seasoning thereby avoiding the sodium in the packaged kind--and forgetting the doctor said I need sodium. It made a huge amount of dip. Then I made a ranch dip from scratch--recipe sounded good but I neglected to figure out that it would barely make 3/4 cup. Guess it will balance out.
Anyway, for my recipe of the week, here's one that I just had last week and I love. Thanks to Linda Preston who got this from her friend Judy Coats.

Split the goat cheese horizontally and drizzle the bottom half with wasabi paste in sort of an "S" pattern, then put the other half of the log back in place. Roll in toasted sesame seeds (watch them carefully--I often have to toast them twice because I don't just stand there and watch every minute). Refrigerate. Just before serving, douse with soy.

Nice with rice thins or rice crackers.
Posted by judyalter at 11:38 AM No comments: 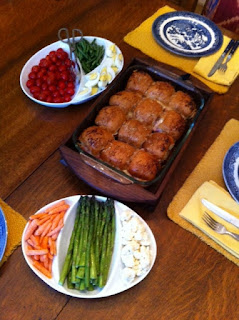 Tonight's supper
I’ve noticed lately that I tend to nibble at a tossed salad, though there was a time when my ex refused to let me eat salad until I’d eaten my entree because he knew I’d fill up on it (how times have changed—now we know filling up on salad is good for you as long as the dressing isn’t too fattening). In recent years, our favorite dressing has been a blue cheese one you make in the bowl and then add the lettuce…and I still like it.


But these days I’m more inclined to assemble a platter of vegetables, as I did tonight. Let your imagination go—peas, carrots, green beans (I prefer the tiny French haricot vert), asparagus, kidney or even pinto beans, cherry tomatoes, tiny new potatoes halved, cubes of cheddar, hard-boiled eggs quartered, artichoke hearts. I often get so carried away I run out of room on the platter. Sometimes I drizzle a vinaigrette over the entire things; other times I serve it on the side—depends on my mood. Occasionally I add a couple of meat selections and that’s dinner—small pieces of grilled salmon or chicken, lamb chops if I’m feeling extravagant, sliced flank steak.


Tonight’s platter accompanied a sandwich casserole—split Hawaiian rolls, layered with gruyere and a nice ham on the bottoms, cream cheese chive/onion spread on the inside of the tops. Brush the whole thing with a mixture of butter, Worcestershire, Parmesan and dried onion. Refrigerate and then bake. It was delicious, and it’s a Kraft recipe. I’m sure you can find it on their web site.


My appetizer was a wonderful goat cheese/wasabi spread a friend brought the other night—I promise to get that recipe and share it soon.  Catastrophe was that the dog ate the biggest piece of the cheese roll. Hoping she doesn’t get sick in the night. Besides I’m disappointed that I didn’t get to serve it. Moral of the story: don’t take appetizers out to the garden table and turn your back.


I don’t often fix dessert but tonight I served a Key Lime Pie (yes, I bought it frozen—I’ve only made it from scratch once and remember it as a lot of work). But the whole meal was terrific. It was in honor of my neighbor’s birthday, and his present was a bottle of olive oil infused with Tuscan spices. I got it at the Virgin Olive Oiler, the store I wrote about last week on this blog. Jay said, “Now I guess I have to cook you supper.” Right on!

Posted by judyalter at 7:55 PM No comments: