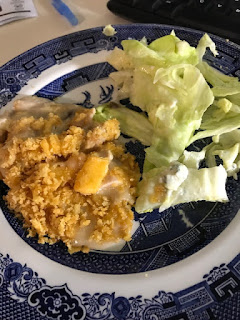 I don’t know about you, but I’ve cooked with canned soup all my life. It’s not quite that I wouldn’t know how to cook without it, but close. How do you make tuna casserole or King Ranch chicken without cream of mushroom soup?

Several years ago I wrote a memoir/cookbook and submitted the manuscript to a university press known for cookbooks. The critique was fairly damning. The reviewer called my recipes “faux gourmet.” The particular target of scorn was King Ranch casserole for which the anonymous critic claimed one should always make their own Bechamel sauce in place of the canned soup.

Canned soup recipes have probably been around as long as canned soups, and probably been controversial just as long. The critic’s comment sounded like snobbery to me, but a lot of people simply prefer not to use canned ingredients. One person on a web forum about canned soups said she objected to tomato soup recipes, because they left an aftertaste. I don’t particularly like beef-based soups, like vegetable beef, and I dislike the smell when someone is heating one in the office microwave. What do I really mean by canned soups? Creamed soups, such as chicken, mushroom, and celery. But then there’s that good bacon/spinach dip recipe that calls for cheddar cheese soup (not always easy to find). There are also products like instant or condensed broth or dried onion soup mix, from which almost everyone makes that sour cream dip that disappears as soon as you put it out. But I’m talking those basic creamed soups.

Some people object that canned soups are high in sodium and fat. Yes, but you can buy low sodium and low fat. Others simply prefer not to use canned soups and make white sauce, as the lofty critic did, or use one of the recipes for substitutes on the web. Trouble with those recipes is by the time you’ve made them, you’ve avoided prepared soup but used at least four other prepared ingredients, gone to a lot of trouble, and probably (I don’t know this for sure) produced a pretty tasteless or artificial-tasting product.

All this is leading up to the Grandma’s Chicken Casserole which I fixed the other night. It was deceptively simple and so good! I have no idea where I got the recipe, but if you gave it to me and are reading this, please let me know. I’d like to give credit where credit is due.

1 rotisserie chicken (I used the traditional seasoned one), meat diced

Arrange the diced chicken in a casserole dish. Spoon the soup evenly over the meat. Cover with shredded cheese, and top with Ritz crackers. Bake at 350o until thoroughly heated and crackers begin to brown. You could probably halve this easily.

Want that queso recipe? I served it at parties, but I also sometimes put tortilla chips in individual bowls, spooned the queso over them, and told my kids, “Here’s dinner.”

1 lb. pork sausage – mild, medium or hot, according to your taste; I use medium

1 16 oz. jar Pace picante sauce – no other brand will do, but again you have your choice of mild, medium or hot

Yes, I know. I almost never use Velveeta, but it is the only thing that works for this recipe.

Brown the meat and then dump all ingredients into your crockpot. Heat on medium, stirring occasionally, until cheese melts. Serve hot.

For years I’ve thought there was only one way to make King Ranch chicken, but I’ve lately realized there are many versions. If you want mine, which is easy and really good, please let me know. Write me at j.alter@tcu.edu.

Posted by judyalter at 10:00 AM No comments: 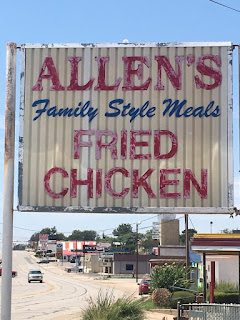 Potato salad isn’t just for July 4th and Labor Day picnics. In some form or another, it’s with us year-round for family meals, restaurant meals, whatever. It’s a staple of the American diet—and yet, few people agree on the “best” potato salad. I once knew a man who ordered cheesecake everywhere it was on the menu because he was always looking for the “perfect” cheesecake. That’s sort of how I feel about potato salad.

I have my likes and dislikes: generally I don’t care for the heavy-on-the-mustard potato salad my daughter likes. Nor do I care for the mashed potato salad that is so common in barbecue joints. I like the version offered at Red, Hot, and Blue because it has large chunks of potato and hard-boiled egg. My son-in-law on the other hand would recoil from any dish that had had-boiled eggs in it. I think my favorite, make-it-at-home recipe is the County Line potato salad—from the Texas barbecue chain with that name. It has lots of dill relish in it. My daughter-in-law Lisa has a similar recipe that uses the relish and pickle juice and is delicious.

And then there’s potato salad without mayonnaise, usually with a vinegar and oil dressing. I make a hot German potato salad that Christian loves. It has a sauce thickened with flour and based on, gulp! bacon grease. Which reminds me that Jordan found a recipe for potato salad with bacon in it. She was intrigued; me, not so much. But you see the wide variety of things that fall under that oh-so-general label of potato salad.

My friend Elaine has no problem deciding which is the “best” potato salad. Elaine grew up in Sweetwater and pretty much longs to live there still. She makes frequent weekend trips to her hometown and when there, always eats at a place she refers to as Mrs. Allen’s. Actually it’s Allen’s Family Meals, a small building on one of the main roads through Sweetwater. Inside, diners sit at a common table and strangers soon become friends. Food is served family style.

It’s the potato salad that draws Elaine. In fact, I’m not sure but that it’s what draws her back to Sweetwater. The trouble is Mrs. Allen apparently doesn’t give out her recipe, and Elaine can’t duplicate the dish. So she brought me some potato salad and a list of ingredients without any quantities or proportion. I can’t duplicate it either. It’s a mashed potato salad and one look identifies the pimiento, but the other ingredients are more elusive. Elaine’s note says “a capful of vinegar and sugar to taste” but there’s no indication of how many potatoes take a capful of vinegar. Here’s Elaine’s list: 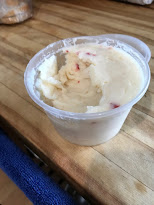 I can definitely taste the vinegar and sugar—a tiny bit too sweet for me—and there is the occasional crunch of minced onion. But the mayo is pretty well masked, and if there are eggs, they must be pulverized. The salad is creamy smooth.

If it were up to me, I’d cut back just a bit on the sugar and add more crunch—green onions and finely diced celery probably. But I haven’t a clue how much vinegar, sugar, and mayo are really in it. And as Elaine’s note says, the vinegar and sugar are what distinguish this version of the staple.

Elaine and I would appreciate any help, so if you come up with an approximation of Mrs. Allen’s potato salad, please write me at j.alter@tcu.edu. I’ll ask Elaine to be the official taster.

Posted by judyalter at 9:43 AM No comments: 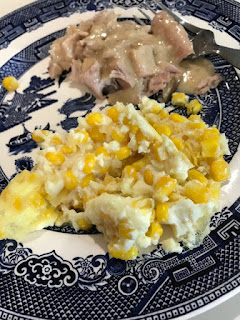 If, as my mom always told me, food is half eaten with the eye, last night’s dinner was no great shakes. It was colorless. If I’d been serving company, I’d have used some garnishes or a dark vegetable to spark it up. But it was just family (an attitude my dad always fought against, insisting you saved your best manners for your family—I have a hard time getting the grown kids and grandkids to accept that!) On the other hand, the part of the meal that was eaten with the taste buds and not the eye was a great success.

I had to give up some preconceived notions to fix this. Unlike a lot of true gourmets, I have never been opposed to cooking with canned soup. There are some great recipes out there, particularly for cream of mushroom and cream of chicken. But I draw the line, most of the time, at packaged dry mixes. Last night’s recipe used Hidden Valley Ranch dressing—too late  I remembered that there are directions online for making your own, though I’m not sure that’s a big improvement. Most recipes call for buttermilk powder, something few of us have on hand. I did find that you can buy it at Central Market for $7.99 a pound. Wonder how long it would take to use up a pound.

Anyway, back to the pork chops. Central Market had big lovely Berkshire chops on sale last week. Even on sale, they were not cheap, so we settled for three chops for the four of us—a good decision since we had leftovers. For years I’ve avoided pork chops because, like chicken, they can be dry if not accompanied by a sauce. But then I found this recipe, and we tried it.

3 or 4 meaty pork chops (not those skinny little ones)

Put chops in cooker, cover with combined soups, and sprinkle dressing mix over it. Cook on low 6-8 hours. The meat literally falls off the bone and is moist and delicious.

Corn pudding sounded to me like a perfect side for pork chops. I have a standby recipe that feeds two, but I was afraid it wouldn’t be enough. I found a version of that same recipe online that feeds 8-10, so I halved it. It was a great success. I know that because the resident teenager ate three helpings and licked the bowl clean.

2 cups corn kernels (cut fresh off the cob would be best, but I used frozen – be sure to defrost first)

If you want, you can chop half the defrosted corn in a process. I skipped this step, but I think it would be a good idea. Mix everything together except milk and eggs. Mix those separately and then pour over corn mixture. Stir to make sure it’s evenly distributed.

Bake at 350o about 40 minutes or until the center is firmly set (it may take a little longer).

Honest, this meal took less prep than anything I’ve cooked in a long time, especially since Christian oversaw the pork in the crock pot in the main house. Took me five minutes max to prepare the pudding, and Jordan cooked it in the house. My toaster oven is not deep enough, and I don’t trust the temperature. I’m lucky to be able to send things into the house when my tiny kitchen isn’t equipped to handle them.

Posted by judyalter at 8:34 AM No comments: