Birthday celebration and the easiest salad ever 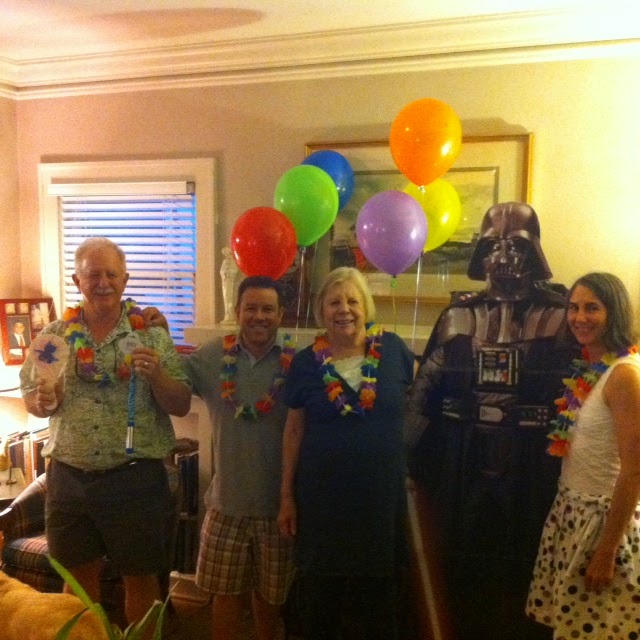 We had a riotous, rowdy celebration of four birthdays tonight--belatedly, mine on the 22nd and neighbor Susan's on the 25th; in advance, son-in-law Christian's Aug. 6 and good friend Phil's Aug. 15 when he'll be out of town. Phil enjoyed Jacob's b'day so much that he said that was what he wanted for his birthday--toys. And he got them--a jump rope, an awful sqishy rubber spider, one of those paddles with a small ball attached (never could master that and neither could he). Mostly it was a no-gifts, have fun party--and we did. I am blessed with such wonderful friends, and a daughter who decorated the house with balloons, party favors, and a giant cut-out Darth Vader (remnant of one of Jacob's parties).
Dinner parties at my house are often potluck, as was this tonight. Neighbor Jay (the good looking one) brought his mother-in-law's spaghetti, I made a marinated vegetable salad and artichoke/cheese bread (even Christian, the non-artichoke eater, had several pieces). For appetizers Jordan brought salami, a sharp Irish cheddar, and a cheddar with rosemary plus an artichoke dip--all so good. For dessert Subie brought-at my request--Black Forest Cake. I'm in heaven--they left the one leftover piece with me. 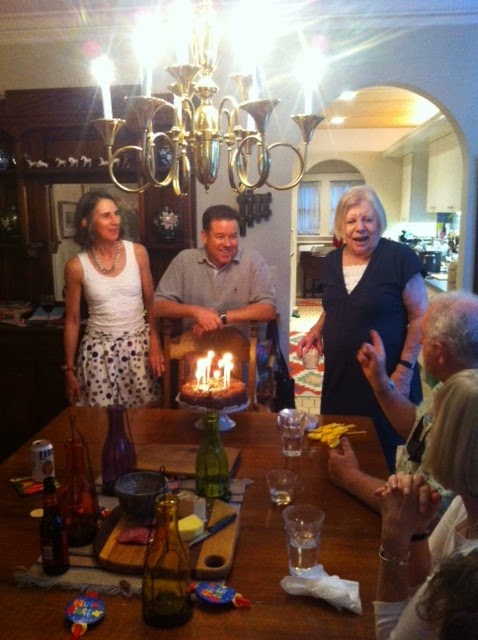 I'm not sure when I've had more fun with this group of people. What I love about them is that they didn't know each other (with a couple of exceptions) until I brought them together and now they are close friends. Sophie was so excited she had to be let out twice before she would come in and quiet down but she finally did and was a good dog. Phil's guide dog, Santiago, always excites her beyond belief but Santiago is nine, a Lab, and all he wants when he's not working is to lie down and rest. Sophie does not understand that. She also pestered Susan's 91-year-old father with a vengeance, I guess because he was new, though he's been here before. Anyway, it was a wonderful evening.

You can use whatever else you want--the original recipe left out corn and black beans but called for cauliflower (I couldn't see buying a whole cauliflower and I'm not particularly fond of it), avocado (which gets lost in the mix), and a shredded head of lettuce (which wilts and ruins the leftovers--without it, the salad is good for days).

I jar bottled salad dressing of your choice. I used Paul Newman's Own Vinaigrette. The original recipe called for Kraft Italian. If you're ambitious, you can make your own. I should have but I was also busy making artichoke/cheese bread--so good!

Let the salad sit several hours or overnight in the refrigerator.

The ubiquitous onion soup dip and other retro foods 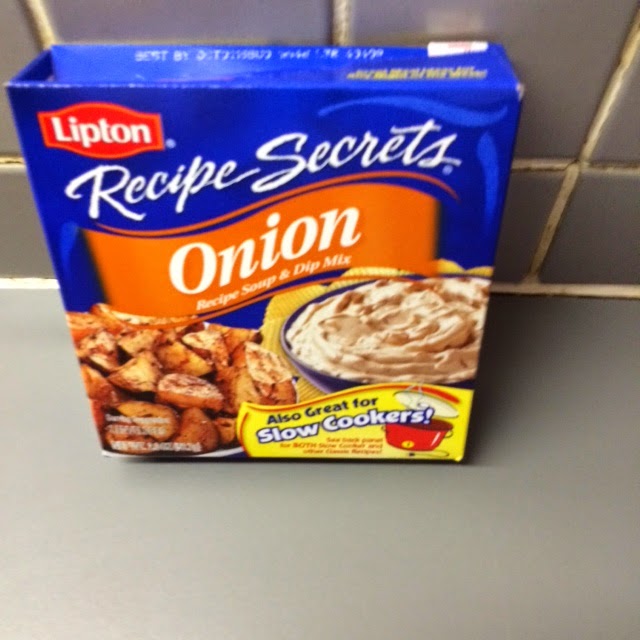 My daughter had a potluck gathering last night, and I love being included in this group of forty-year-olds (though Jordan will huffily remind me that she's not forty yet!). Being lazy, my contribution was potato chips with onion soup dip. People deride it as passé, so sixties, trite, etc. but they consume every bit of it. I actually serve it fairly often, It's so easy to make. One of Jordan's friends and I actually had a whole conversation about the whole onion soup thing.
Several years ago friends and I decided to have a retro potluck dinner--we'd serve the foods of the sixties that we remembered from growing up.
I announced I would make tuna noodle casserole, and one friend asked, "Do I really have to eat it?" I assured her mine is good...and it is. Another friend made orange Jello salad with carrots and pineapple in it--remember that? And we had two batches of onion soup dip--one made with no-fat sour cream, which we pronounced a crashing failure. This was back before we realized that if the manufacturers took the fat out, they put in something to substitute, probably worse. I always buy whole sour cream, cottage cheese, and cream cheese, rarely buy anything low fat. Just eat less!
Back to the successful batch of onion soup dip--one man was so taken with it, he said to his wife, "This is delicious. Can you get the recipe?" She smiled smugly and said, "I think I can handle it."
Here's my tuna casserole recipe, which I really like (I also used to use it for leftover turkey):

One cup white wine
Handful of herbs--thyme, rosemary, tarragon, oregano, black pepper, savory, parsley, whatever strikes  your fancy, though I'd leave out cumin, chile powder and related spices
Egg noodles - maybe 5 oz. or so
1 7-oz. can chunk albacore tuna
1 can cream of mushroom soup--not low fat
Vegetable of choice--I like frozen green peas; use however much you want
Dash of Worcestershire
Salt and pepper to taste
Pinch of dry mustard if you want
French fried onion rings or other crispy topping of your preference--buttered Ritz cracker crumbs are also good (nobody said this is a weight watchers' recipe)

Boil wine and herbs hard until mixture turns black. Remove from heat and set aside.

Mix tuna, noodles, soup, wine mixture, vegetable and seasonings. Top with topping of choice and bake until casserole is bubbly and topping is brown. 350 for about 25-30 minutes. Honest, it's good! But then, I like almost anything tuna.

Mix soup seasonings and sour cream and chill in a bowl. Put chips in a separate bowl. Serve--and sit back and  laugh.

Note I wanted to post a cute picture of myself and my hostess-daughter from last night, but I can't get it out of regular email and into my photo file. Hence the picture of the onion soup box. Eye-catching, isn't it?
Posted by judyalter at 10:48 AM No comments:

One year, in another house, we had a bumper crop of zucchini and I despaired over finding new things to do with them--you can only sauté in soy sauce so often or broil with olive oil, salt and pepper, and Parmesan. I did occasionally stuff scraped-out halves with a mixture of sautéed scallions, chopped celery, the zucchini's insides, bread crumbs, and salt and pepper, topping them with grated cheddar or Parmesan. I still do that often, and a half a zucchini makes a good dinner for me.
But lately I've been reading recipes for a variety of stuffed zucchini--Italian style with capicola, lemon, ricotta topped with marinara; a Tex-Mex with garlic, jalapeno, chipotle chili powder, Muenster, a chopped tomato, scallions and cilantro. A lemon-pasta version sounds good--tiny ditalini pasta, a shallot, cream, chicken broth, Havarti, Parmesan, an egg yolk, parsley, lemon zest and breadcrumbs.
But the recipe that caught my fancy was for crab-stuffed zucchini with crabmeat, mayonnaise, Creole mustard, Worcestersire, and cayenne with cayenne pepper and scallions for topping. If you've read much of Potluck with Judy, you know I'm a big tuna fan, and it occurred to me that I could stuff one of those zucchini in my fridge with a tuna and cheddar mixture I really like. Usually I put it into pasties, using refrigerator biscuits, putting the tuna between two halves, sealing the edges and brushing with butter before baking. But I bet it would be good with zucchini and maybe a bit more healthy.

I haven't tried this yet, but I guess I'd put some extra cheddar on the top and bake. More cheese never hurt anything.
Posted by judyalter at 2:43 PM No comments: