Spam—more than you ever wanted to know 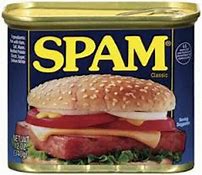 I did it! I bought a can of Spam. I’ve been wanting to try it again for some time. Bought a can a while back and ended up putting it in the church canned goods drive. But this time I ate it.


You see, Spam is a childhood memory for me, a good one. I was a kid during WWII and Spam appeared on our table frequently, although I think for breakfast and lunch but rarely if ever dinner. Introduced in 1937, this canned pork product was developed to meet the difficulty of getting fresh meat to servicemen, but it was also served in a lot of households. It was cheap, and it had a long shelf life.


The name? Spam is a Hormel Food, and the company won’t tell, claiming only a handful of executives know the secret. Best guess? It is an abbreviation of spiced ham. Monty Python adapted the name in a skit about unsolicited electronic messages—and it stuck. Hearing the word spam today, most people think first of the email term and not the food product.


During WWII, military personnel joking called it mystery meat or meatloaf without basic training or ham that didn’t pass the physical. It was most frequently served in the Pacific theater and remains popular throughout the region, specifically in Hawaii where it is the basis for a treat known as musubi—marinated and fried slices placed on rice and wrapped with dried seaweed.  On Oahu, chefs compete with new and original recipes at an annual Spam Festival. In the Philippines, where it is a sought-after delicacy, Spam is often eaten with garlic fried rice and sunny-side-up eggs—a breakfast dish. Statistics show that the average person in Guam eats sixteen cans a year; it’s even sold at McDonald’s on that island. And surprise! It’s available in England, where they deep fry it or make hash with it for breakfast. Actually, in  2003 Spam was sold in forty-one countries and trademarked in over a hundred.


Spam hasn’t fared so well in this country. By the 1970s consumers were dismissing it because of the high fat content and its tendency to form gelatin during the cooking process. It is also high in cholesterol and sodium and is considered by many a poverty food. Probably more people eat it than you think—they may not all admit it. Spam is produced to this day in Austin, Minnesota, home of the Spam Museum and the National Spam Recipe Competition. (Austin, Texas has a tongue-in-cheek cookoff called Spamorama tied to April Fool’s Day.)


My mom didn’t go in for any such fancy recipes. She often took an unsliced can of Spam, scored it like a ham, topped it with brown sugar and cloves, and baked it. Alternatively, she fried slices.


So what about my taste test? I ate it sliced, at room temperature, and found the texture fine, the flavor vaguely like a mild ham. It was not gelatinous, but it was too salty.


Will I buy it again? Probably not. Would I be polite and eat it, if served to me in someone’s home? Of course. Would I eat it if desperately hungry? You bet!
Posted by judyalter at 12:29 PM