This is National Chili week—what better time ot talk about Cincinnati chili. We Texans know northerners can’t make a decent bowl of chili, but the thing about Cincinnati chili is that it doesn’t even try to approach the Terlingua model. It is its own dish, and in 2013 the Smithsonian named it one of “20 Most Iconic Foods in America.” Detractors call it that “weird cinnamon chili.” Chili purists best not read on.

Apparently Macedonian immigrants first made this dish in the 1920s but it really came to fame in 1949 when an immigrant named Nicholas Lambrinides opened a restaurant that happened to have a breathtaking view of Cincinnati’s skyline. He called his creation Skyline Chili, and today it’s served in a chain of restaurants or you can buy it canned. A dinner kit is also available. I think a friend who lives in the Cincinnati area told me she buys a mix.

The distinguishing things about Cincinnati chili are, yes, the cinnamon and the fact that it is served over spaghetti and topped with grated cheddar. I first heard of it when I researched my book, Texas is Chili Country. At the time I dismissed it as a regional oddity, but recently I came across a recipe and decided to try it. My version, which cobbled together two recipes, was a successful experiment—a critical father-and-son audience approved—but I learned a couple of things I’d do differently. 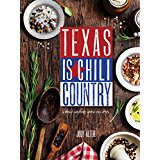 Please note: start this the day before you intend to eat it.

A pinch of ground cloves (the original recipe called for ¼ tsp but I found the clove taste too strong—when you ca clearly identify one spice out of all, you’ve used)

¼ tsp. cayenne or to taste (recipe called for ½ tsp)

This goes together like nothing you’ve ever made before. In your large chili kettle, sauté the tomato paste—no oil, no nothing, just the paste. It’s not as easy as it sounds. You have to continually stir and scrape to keep it from burning. You’re done when the tomato smell is rich and toasty—only takes a minute or two. Add the water and ground beef. No, you really haven’t browned the beef first. Just add the raw ground meat and stir until everything becomes a mush. Simmer until it looks like a meaty paste and the meat is cooked.

Take the pot off the burner and let it cool enough to refrigerate overnight. The next day, scrape the congealed fat off the top. Bring the mixture to a simmer and add the remaining ingredients, except the vinegar and chocolate—once again, you don’t sauté the onion or garlic. Just put it in raw.

Simmer for at least a couple of hours, letting the flavors blend. Now you can either serve or refrigerate and re-heat later to serve. Just before serving stir in the vinegar and chocolate. Serve over spaghetti and top with grated cheddar.

Posted by judyalter at 3:39 PM