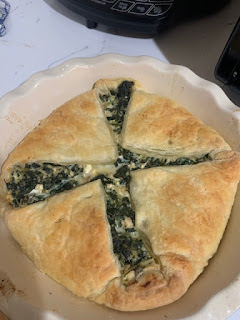 That wonderful Greek spinach pie has been on my cooking bucket list for a long time. I printed out the NYTimes recipe for skillet spanakopita and kept it in my file. But every time I looked for a new recipe, I passed it by—the phyllo was scary and all those steps intimidating. Daughter Jordan forced my hand by bringing home all the ingredients from the grocery. I couldn’t ignore all that fresh spinach!

I can’t share the recipe with you because I really don’t want to tangle with the Times legal department, but I can tell you about some of the changes and shortcuts I took. I ended with what I call deviant spanakopita, and, my oh my, was it delicious. All those intimidating steps really aren’t that bad once you take it one step at a time.

Facebook has a page called “The New York Times Cooking Community,” and a thread on there convinced me I am not the only one hesitant about phyllo. But someone had a suggestion that started me on my experiment—use puff pastry instead of phyllo. Not being a purist, I thought that sounded good. We also substituted a handful of green onion for the leeks, because the store did not have leeks. As you can see, I deviated from the beginning.

As I sauteed spinach in butter, it dawned on me that with two large bags, I only had two-thirds of the amount of spinach the recipe called for. Dilemma: did I want to have thinner filling or add a can of spinach (I am one of the few I know who eats and enjoys canned spinach but I recognized it would drastically change the dish). I’ve tried commercially prepared spanakopita, and the thing I don’t like is there’s too much phyllo for the spinach. I want thick filling, like you get when the Greek Orthodox Church has a bake sale. I decided what I needed was a smaller pan than the ten-inch cast-iron skillet the recipe called for. I used a pie pan. The advantage of that change was that I can put a pie pan in my toaster oven but can’t fit a skillet. We would have had to run it into the main house to bake.

But I didn’t adjust the other ingredients—feta, lemon, eggs, Parmesan, nutmeg, dill, etc. Theoretically I should have reduced each by one-third, but I didn’t. The result was a filling more pungent than traditional spanakopita, quite lemony. Jordan assured me she was raised by a woman who thought there could never be too much lemon (gosh, I wonder who!), and she loved every bite. I did too.

When I put the bottom sheet of pastry in the pie plate, all four corners overlapped, so I pulled them up into what looked like a galette. The recipe called for putting the skillet on the stove for a few minutes to brown the bottom crust and then baking. I skipped that step, went straight to baking, and couldn’t tell that it mattered.

After about twenty minutes in a 350 oven, we had a lovely looking dish that would serve four amply. But it was only Jordan and me—son-in-law and grandson aren’t one bit interested in something with spinach. So we had a ladies’ supper one night and delicious lunch another day.

If you’re really into cooking, I recommend an annual subscription to Sam Sifton’s cooking column in the NYTimes. I think it’s something like $42/year. But if you just want to make spanakopita, recipes abound on the internet. I hope the shortcuts I’ve discussed will help you. Big thing: don’t be frightened away from trying it. 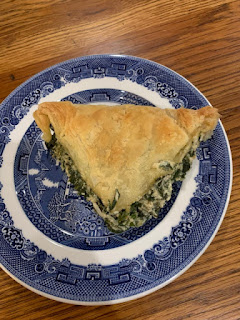 Posted by judyalter at 9:13 AM